The Way You Make me Feel - Maurene Goo 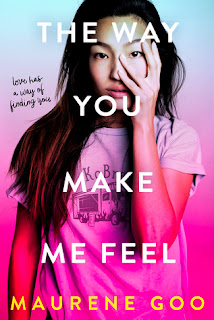 Clara Shin lives for pranks and disruption. When she takes one joke too far, her dad sentences her to a summer working on his food truck, the KoBra, alongside her uptight classmate Rose Carver. Not the carefree summer Clara had imagined. But maybe Rose isn't so bad. Maybe the boy named Hamlet (yes, Hamlet) crushing on her is pretty cute. Maybe Clara actually feels invested in her dad’s business. What if taking this summer seriously means that Clara has to leave her old self behind?


This is the second book that I've read by Maurene Goo, and I have to tell you: I loved it as much as the first one.  The Way You Make me Feel is the book I wish I'd had when I was a teenager!

This book is filled with all the humor and fun I would expect from Maurene Goo's books.  Her main character - Clara - has all the makings of a class prankster.  She gets nominated for prom queen (maybe as a joke, maybe not), and at prom, she pulls a Carrie type prank that leads to a fire.  Now, don't get me wrong - I do think a prank that leads to a fire is serious, and Clara's dad was right to punish her.  HOWEVER, I do appreciate Clara's more mild pranks and her sense of humor.  I mean - she's teenager for pete's sake! She's allowed to have some fun before she grows up and has to deal with all the seriousness of being an adult, right?

Anyway!!!  I appreciate that Clara is so well developed.  She appears strong and self-confident, but there's also that typical thread of self doubt that I think every teen experiences as some point in their lives.  I like that Clare was open to giving Rose a chance.  They had some issues when they first started working together at the KoBra, but they were able to put them aside so they could get to know each other.

All the characters outside Rose and Clara are well rounded as well.  They all have good ideas of who they are, and what they want.  The only character I didn't like was Clara's mom.  That's just because she was a selfish brat who probably never should have procreated in the first place.  She only cares about herself, and it was really sad to learn about and see the way she treated Clara.  Clara was lucky to have a dad who cared about her so much, since he was the only stable parent in her life.

There is enough tension and big events in the story that made me want to keep reading so I could find out what happened.  There is also enough light hearted, funny moments in the book that I laughed a lot. The story was well developed and well written as well - the author really did a great job of keeping up the pacing and story throughout the entire book.

I love that Clara's dad has a food truck and dreams of opening a restaurant.  He is very dedicated to his truck and his daughter, and you can tell he really cares about doing what he can to move towards his bigger dream!

If you are looking for a great book that's full of fun, romance, food trucks, and great characters - this is the book for you.

Email ThisBlogThis!Share to TwitterShare to FacebookShare to Pinterest
Labels: Maurene Goo, The Way You Make Me Feel, YA Book