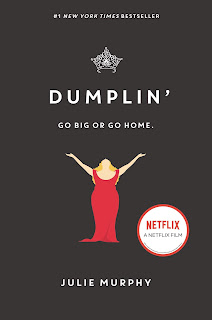 
~~~~~~~~~~~~~~~~~~~~~~~~~~~~~~~~~~~~~
Self-proclaimed fat girl Willowdean Dickson (dubbed “Dumplin’” by her former beauty queen mom) has always been at home in her own skin. Her thoughts on having the ultimate bikini body? Put a bikini on your body. With her all-American beauty best friend, Ellen, by her side, things have always worked…until Will takes a job at Harpy’s, the local fast-food joint. There she meets Private School Bo, a hot former jock. Will isn’t surprised to find herself attracted to Bo. But she is surprised when he seems to like her back.

Instead of finding new heights of self-assurance in her relationship with Bo, Will starts to doubt herself. So she sets out to take back her confidence by doing the most horrifying thing she can imagine: entering the Miss Clover City beauty pageant—along with several other unlikely candidates—to show the world that she deserves to be up there as much as any twiggy girl does. Along the way, she’ll shock the hell out of Clover City—and maybe herself most of all.

Millie and Amanda together are basically one giant moving target that says MAKE FUN OF US.

I almost quit reading.  Like,  this line in and of itself made me hate the main character more than I would have thought possible. I could have ended up liking her, maybe, had it not been for these thoughts:

Amanda’s legs are uneven, so she wears these thick corrective shoes that make her look like Frankenstein. (At least according to Patrick Thomas.) When we were kids and she didn’t have her shoes yet, Amanda just limped around, her hips swiveling up and down with each step. She never seemed bothered, but that didn’t stop people from staring. The nickname thing is pretty lame if you think about it. Frankenstein was the doctor, not the monster.

I’m fat, but Millie’s the type of fat that requires elastic waist pants because they don’t make pants with buttons and zippers in her size. Her eyes are too close together and her nose pinches up at the end. She wears shirts with puppies and kittens and not in an ironic way.

Her judgement on others right from the beginning of the novel made me wish that Willowdean would hole herself up in a tree on some random mountain where she can live off the land and never have to be around people again.

Will doesn't just have these judgemental thoughts at the beginning of the book.  She is like this from page one til the very end.  When she decides to enter the local beauty pageant organized by her mother, she tells her friend Ellen.  Ellen decides to enter the pageant, as well, but doesn't say anything until the day they register.  A lady comes around at registration to hand everyone welcome packets, and whey she gives one to Ellen, Will states that Ellen isn't running.  Well, when El states she is running, Will gets pissed and makes a comment about wanting to have something that is just for her.  They have a fight about it, and don't talk to each other again until the day before the pageant.

The mere fact that Will thinks El shouldn't enter the pageant because Will wants something just for herself is telling of just who Will is - and suggests that Will is jealous of Will because of the way she looks and the fact that she is thin.  After all, this is how Will describes El:

El is everything I am not.  Tall, blond, and with this impossible yet sexy paradox going on that only seems to exist in romantic comedies.

Just the fact that she feels the need to compare herself to El, and lament the fact that El is skinny, makes me certain that this book is not as body positive as it's touted to be.

Plus, there's the fact that Will, despite claiming that she's comfortable with her body, always gets incredibly uncomfortable every single time Bo touches her during their secret make out sessions.  Like, she's super afraid that if he touches her he'll realize she's fat?!  Dear Willowdean: He already knows you're fat, and he doesn't care, so why do you?  Also, when Will finds out that Bo is going to be transferring to her high school, she does the most dramatic thing ever: She quits her job with zero explanation, and refuses to spend any more time with Bo, because she is convinced that he would never ever talk to her at school.  She doesn't take time to have a conversation with him about this.  She doesn't take time to ask if he actually likes and wants to have a relationship with her. (Spoiler alert: He does!) She just makes a huge assumption and does something even more dramatic as a result.  All because she assumes that Bo is as uncomfortable with Will being fat as Will is.

Not only did I have a problem with the way Will viewed herself and judged other people, I had a problem with the way other characters were portrayed as well.  There wasn't a whole lot of depth to the characters. The way each character was portrayed at the beginning of the novel was they way they were through the entire novel.  Will was always the "savior" of the low down people like Millie and Amanda who needed help from someone much cooler than them to even be seen as anything other than the losers that their "savior" thought they were.  Callie was always the mean girl who had to dig at other people and make them feel bad.  Amanda and Millie were always the quiet mousy girls who hung around in the background just waiting for someone to rescue them. Hannah was always the bitter, surly killjoy that nobody wanted to talk to.

There is more to people than how they appear on the surface - but this book totally missed that mark.  There was no change for characters, no depth, no growth, no realization that they can be more than who other people think they are.

The story itself was not well rounded out either.  It just felt flat to me and not as fleshed out as it could have been.

All of this added up to a book that wasn't even tolerable to me. Go have fun reading a different book instead.  This one can be the book you use to prop under the wobbly leg on your table.


If you feel like reading some reviews from others: Here you go. These are reviews that really sum up what is so bad about this book.  (Sorry, not sorry.  This book was bad.)