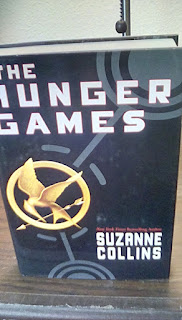 The nation of Panem, formed from a post-apocalyptic North America, is a country that consists of a wealthy Capitol region surrounded by 12 poorer districts. Early in its history, a rebellion led by a 13th district against the Capitol resulted in its destruction and the creation of an annual televised event known as the Hunger Games. In punishment, and as a reminder of the power and grace of the Capitol, each district must yield one boy and one girl between the ages of 12 and 18 through a lottery system to participate in the games. The 'tributes' are chosen during the annual Reaping and are forced to fight to the death, leaving only one survivor to claim victory.

When 16-year-old Katniss's young sister, Prim, is selected as District 12's female representative, Katniss volunteers to take her place. She and her male counterpart Peeta, are pitted against bigger, stronger representatives, some of whom have trained for this their whole lives. , she sees it as a death sentence. But Katniss has been close to death before. For her, survival is second nature.
~~~~~~~~~~~~~~~~~~~

This was my second read of The Hunger Games, and I loved it just as much as the first time!  I re-read it as part of The HungerAlong on Twitter - and hearing what everyone else thinks of it as they are reading/re-reading has been so fun.

Are you wondering how much I love The Hunger Games?!

Yep, I love it so much, you get four gifs of screaming and  yelling and jumping!

* Katniss - Straight up, Katniss is absolutely in my top 3 of favorite literary badass young ladies.  She is amazing, and so strong given everything that happens to her throughout not only this book, but the entire series.
* Effie Trinket - I know she is really a terrible person - she is complicit in the deaths of so many kids and goes along with these hunger games every year.  I truly believe, however, that she only does it because she has to.  I believe she really cares about her tributes, and wants them to survive and have a better life.
* Rue - There is not a single thing I don't love about Rue. She is definitely one bad ass little girl - and she's so smart and underestimated.  I was gutted when she got killed!
* The friendship between Katniss and Gale. There were times when I wanted to kick Gale right where the sun doesn't shine, but he and Katniss had this friendship, this bond, that I loved.
* When Katniss has that flashback of Peeta burning a loaf of bread so she can have it to eat.I think this was so important to the story, because it shows what kind of person Peeta really is.  He


Things That Were Probably Mediocre, But I still Loved Them:

* The writing was technically not as well developed as some books you've probably read.  It was well written, but just seemed a bit simplistic, if that makes sense?! However, the story was so good, that I was willing to look past that.
* The entire idea of sending kids out to kill each other for food is so fucking disturbing and awful, but the whole idea of the books - exploring the effect of violence on young people - is just an amazing idea, and Suzanne Collins explores this so well in The Hunger Games.