To All the Boys I've Loved Before - Jenny Han 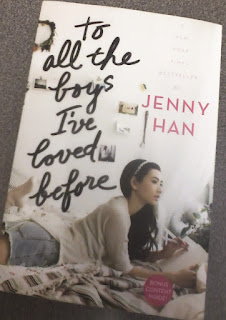 The premise of this story sounds cute at first: Lara Jean writes a letter to each of the boys she's "loved" before - five in all.  Then the letters are accidentally mailed by someone, and Lara Jean freaks out.  This somehow leads to her and her old (former) friend Peter Kavinsky - a receiver of one of said letters - pretending to be a couple so he can make his ex jealous and she can make Josh (another letter receiver) think she never liked him.

*Lara Jean's dad is actually a prominent feature in this book.  There has been a trend of absentee parents in YA Books - so it's nice to see there are books coming out that actually have parents in the picture.

*Lara Jean is incredibly naive and immature, even for a teenage girl.  She is also the perfect reason why young people need to be taught age appropriate comprehensive sex ed.  Does she really think Margot and Josh never had sex or never even thought about it!?  They're teenagers, not monks.  Also, in my opinion, Lara Jean is way too old to be calling her dad "Daddy."  Just - no.  You're a teenager, not a 5 year old.  Stop. Saying. Daddy!

*The "romance" between Lara and Peter was contrived even for a fake romance.  When they got to the end and realized they actually like each other, it felt off and fake still even when it was real!  There was no chemistry between them - it all just felt overly forced.

*The friendship between Chris and Lara was just - nothing!  Chris was hardly ever around - and when she was, there didn't feel like there was any real connection between her and Lara. They appear to have nothing in common, so it left me wondering why they were even friends to begin with.

*The story was not as well fleshed out or well developed as it could have been.  There wasn't a ton of depth to it, even for a YA contemp.


I will probably finish the series just out of curiosity, but I wouldn't really recommend this to others.

Email ThisBlogThis!Share to TwitterShare to FacebookShare to Pinterest
Labels: Jenny Han, To All the Boys I've loved before