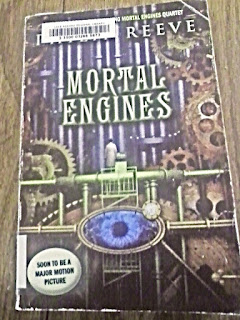 The great traction city London has been skulking in the hills to avoid the bigger, faster, hungrier cities loose in the Great Hunting Ground. But now, the sinister plans of Lord Mayor Mangus Crome can finally unfold.

Thaddeus Valentine, London's Head Historian and adored famous archaeologist, and his lovely daughter, Katherine, are down in The Gut when the young assassin with the black scarf strikes toward his heart, saved by the quick intervention of Tom, a lowly third-class apprentice. Racing after the fleeing girl, Tom suddenly glimpses her hideous face: scarred from forehead to jaw, nose a smashed stump, a single eye glaring back at him. "Look at what your Valentine did to me!" she screams. "Ask him! Ask him what he did to Hester Shaw!" And with that she jumps down the waste chute to her death. Minutes later Tom finds himself tumbling down the same chute and stranded in the Out-Country, a sea of mud scored by the huge caterpillar tracks of cities like the one now steaming off over the horizon.

In a stunning literary debut, Philip Reeve has created a painful dangerous unforgettable adventure story of surprises, set in a dark and utterly original world fueled by Municipal Darwinism -- and betrayal.
~~~~~~~~~~~~~~~~~~~~~~

I picked up this book after a co-worker recommended it.  I went into it with high hopes because I've read three other books by the same author and really enjoyed them.  This book, however, fell flat for me.

The book had an interesting premise.  But when I started reading what I found was what I thought was a hot mess of words thrown together into something that just didn't work.

Let's start here: This book was supposed to be written for teenagers.  But the writing was especially juvenile.  It read like it was written for a much younger audience.  That leads me to state this again: Teenagers are smarter than adults give them credit for.  So write books that treat teens like they are actually smart!

* Now: The characters.  These characters are teenagers, but they behave like much younger children.  Hester is unnecessarily mean to Tom, even when he tries to be nice to her.  She will have a moment of "Hey look at you I'll say something nice now," and then she turns again and starts treating him like trash.  Tom reads like he is a 10 year old trapped in an older teen's body.  Part of that may be because he was raised in a traction city and spent the majority of his life in the museum as a historian apprentice.  Up until he got thrown from the city by Valentine, he had never been outside his traction city.  But, even people who never have a chance to move around their world should be a bit more aware and age appropriate, especially when they know that there are so many things that happen: like the fact that London chases down and eats other smaller cities.  The character that I really did love was Katherine.  She was the most well rounded character in the entire book - it's too bad her father was such a trashy human.

*The story itself felt like it lacked focus.  There was so, so much going on through the entire book - it felt to me that the author could have taken a few points here and paired them down to make a great book, and saved the rest for another book.

So, while this book started out as a good idea, it ended up being something I personally would not recommend to others.  Read Larklight, Starcross, and Mothstorm instead.  They are actually worth the tine.