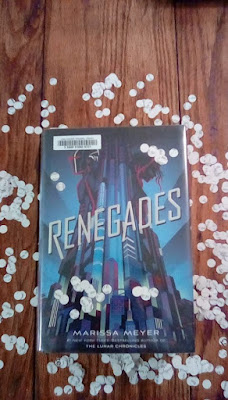 The Renegades are a syndicate of prodigies — humans with extraordinary abilities — who emerged from the ruins of a crumbled society and established peace and order where chaos reigned. As champions of justice, they remain a symbol of hope and courage to everyone... except the villains they once overthrew.

Nova has a reason to hate the Renegades, and she is on a mission for vengeance. As she gets closer to her target, she meets Adrian, a Renegade boy who believes in justice — and in Nova. But Nova's allegiance is to a villain who has the power to end them both.
~~~~~~~~~~~~~~~~~~~~~~~~~

Ok: So let's get the obvious out of the way right off the bat.

1. Yes, there are some obvious superheros that share similarities with some beloved Marvel superheros.

2. It's pretty freaking obvious that Adrian is the Sentinel.

Those things being said: I still love every single second of this book. Every. Single. Second.

If you're unfamiliar with Renegades, the best way to sum it up is: Spies, Superheros, death, and a helluva of an ending.

I don't want to give super spoilers, but a few minor spoilers might slip in - so read with caution!

* As with her Lunar Chronicles series, Meyer has some great characters in this book.  We learn a lot about them during the course of this book. The book moves slowly and takes a while to build up to the main point at the end - so we have a lot of time to sit with our characters and really see what they are like while the story develops around them.  I don't think there is a single character in this book I don't like.  They are all very well written and well developed, and have enough change throughout the book to keep them real.

* This story is slow to build, but I think that works.  Meyer takes her time showing us this world and the people who inhabit it.  We get to see when things happen in their own time, and when something BIG does happen (that carnival scene?!) we get to see the characters react in a way that is so true to who they are, and it is amazing.

* THAT SCENE IN THE FUN HOUSE!!!  That's all your getting - but if you've read the book you know what I mean.

* While the story may have been slow to build up - I like how well written it was.  I didn't reall care that it took a while to get to the big stuff at the end.

* Max.  I love everything about Max, including all the secrecy surrounding what he can do (and what he will be used for!)


WHAT BOTHERED ME:
While I did really love this book, there were two things that I thought should have been more obvious. I guess I wouldn't super say this bothered me, but it was pretty obvious that:

A: Adrian is the sentinel.  How could nobody figure that out?!  I mean - they are never together.  Whenever the sentinel is around, Adrian is suddenly MIA, then all of a sudden the sentinel will leave, and then BAM - there's Adrian again. And yet, nobody connects the dots and figures out they are THE SAME PERSON?!

B: At the carnival - why didn't Adrian figure out who Nova really was?!  It was super obvious, amiright?!

Other than that, I loved this whole entire book.  I recommend that everybody: