The Rule of One - Ashley Saunders and Leslie Saunders 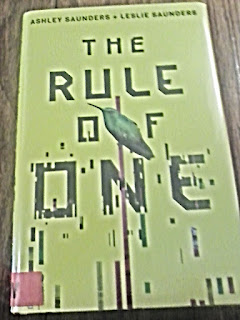 
~~~~~~~~~~~~~~~
In their world, telling the truth has become the most dangerous crime of all.
In the near-future United States, a one-child policy is ruthlessly enforced. Everyone follows the Rule of One. But Ava Goodwin, daughter of the head of the Texas Family Planning Division, has a secret—one her mother died to keep and her father has helped to hide for her entire life.
She has an identical twin sister, Mira.
For eighteen years Ava and Mira have lived as one, trading places day after day, maintaining an interchangeable existence down to the most telling detail. But when their charade is exposed, their worst nightmare begins. Now they must leave behind the father they love and fight for their lives.
Branded as traitors, hunted as fugitives, and pushed to discover just how far they’ll go in order to stay alive, Ava and Mira rush headlong into a terrifying unknown.

I checked out The Rule of One after doing a search for dystopian books and finding this one recommended on a bookish website I frequent.  I started reading it thinking it was a pretty cool concept, but quickly found myself bored not only by the lack of happenings in this book, but also by the characters, the story development and the interactions between the characters.

I found the writing to be a bit simple even for a YA book.  Teenagers are smart - so why not write books that show that.  I expected there to be more tension in the book, and there just wasn't. Or if there was, it was so underdeveloped and so flat that I just didn't care.

The two main characters, Ava and Mira, were too similar, even for people who are supposed to be sharing one life.  When they were at home in their private hidden bedroom, there was nothing to really help differentiate them in my mind.  They were both really boring as well - to me anyway.  I didn't really find anything special or noteworthy about either one of them.

To be honest, other than the cover, I didn't really find any thing in this book that was super memorable or awesome for me.  The whole book, from character development to story development to action just fell flat.

I think the best way to wrap up this post is to tell you exactly how I felt with the following gifs:

If you've read this book, tell me what thought in the comments below!
Posted by Maggie at 11:26 AM

Email ThisBlogThis!Share to TwitterShare to FacebookShare to Pinterest
Labels: Ashley Saunders, Leslie Saunders, The Rule of One