There's Something About Sweetie - Sandhya Menon 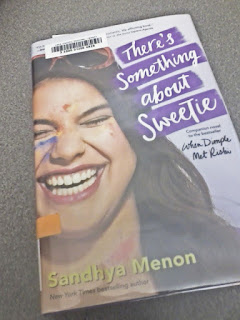 
~~~~~~~~~~~~~~~~~~~~~~~~~~~~~
Ashish Patel didn’t know love could be so…sucky. After he’s dumped by his ex-girlfriend, his mojo goes AWOL. Even worse, his parents are annoyingly, smugly confident they could find him a better match. So, in a moment of weakness, Ash challenges them to set him up.The Patels insist that Ashish date an Indian-American girl—under contract. Per subclause 1(a), he’ll be taking his date on “fun” excursions like visiting the Hindu temple and his eccentric Gita Auntie. Kill him now. How is this ever going to work?Sweetie Nair is many things: a formidable track athlete who can outrun most people in California, a loyal friend, a shower-singing champion. Oh, and she’s also fat. To Sweetie’s traditional parents, this last detail is the kiss of death.Sweetie loves her parents, but she’s so tired of being told she’s lacking because she’s fat. She decides it’s time to kick off the Sassy Sweetie Project, where she’ll show the world (and herself) what she’s really made of.Ashish and Sweetie both have something to prove. But with each date they realize there’s an unexpected magic growing between them. Can they find their true selves without losing each other?
~~~~~~~~~~~~~~~~~~~~~~~~~~~~~

If you've read When Dimple Met Rishi, you are already slightly familiar with Rishi's younger brother Ashish Patel.  Ashish is as different from Rishi as you could possibly imagine.  He's not as traditional as his older brother, he's into sports - specifically basketball, he (until recently) never wanted to follow his parents or brothers lead and date Indian-American girls.  BUT, then he met Sweetie.

Sweetie is a wonderful, charming young woman who also happens to be fat - and is growing up with a mother who really wants her to lose weight and be skinny.  Her mom is so convinced that there is something wrong with Sweetie that she even goes so far as to tell Ashish's parents that Sweetie can't date him because she's not good enough for Ashish and won't be until she's skinny.

Anyway - long story short - Ashish and Sweetie do go on dates together, as you can tell from the description.  Now of course, Sweetie's parents don't know - and normally I'd be against kids dating without their parents knowledge, but in this case, it works and I'm here for it.

There is a great, wonderful cast of characters in this book.  I think every single character adds so much to this story - even when they just have small part to play in where the story is going.  Each character has such a well developed and distinct personality. The author does a great job of creating characters that are well written, with their own distinct personalities, who work well with each other.  Even the characters who's personalities were a bit much (Tina auntie, and Samir in the beginning of the novel) were so well done!  You will love these characters.  (Watch out for Pinky - she's great and so fun!)

I think there is also a lot of chemistry between Sweetie and Ashish.  They have the physical attraction to each other, and they learn that they have enough in common with each other as well to have a real, good relationship.  I love what they have together.

This story is a total cute, fun read.  The story is well developed, and there are so many fun and funny moments that just make it even more worth reading.  I love that each moment in this book feels perfect and fits with the book as a whole.

Sandhya Menon's books are well written as always - and I love that she manages to not only write her stories well, but to weave in so many important things to her books as well.

Are you surprised that Sandhya Menon has supernatural references in her book?!  I'm not!  I love that she loves Supernatural as much as I do, and weaves that in to her writing.  So - let's have some of my favorite Supernatural memes and gifs to end this post: 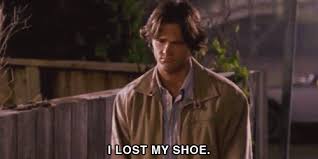 I want to actually end by saying that this book does deal with fat teens and the way that fat people can often be treated like they are less than because they are fat.  I want you to know, from one fat person to another, if you are struggling, know you are worth it. You have value even if other people claim you don't.  You will find yourself in Sweetie, and I hope you know there are other people out there who are in your corner and who love and accept you just the way you are!  Now go read this fabulous book, and when you're done, come back here and talk to me about it.  I want to know what you think!

Email ThisBlogThis!Share to TwitterShare to FacebookShare to Pinterest
Labels: romance books, Sandhya Menon, There's Something About Sweetie, YA Romance