Somewhere Only We Know - Maurene Goo 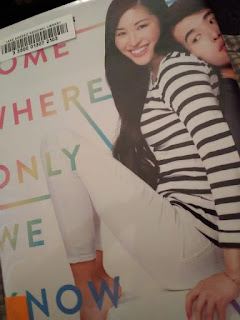 
~~~~~~~~~~~~~~~~~~~~~
10:00 p.m.: Lucky is the biggest K-pop star on the scene, and she’s just performed her hit song “Heartbeat” in Hong Kong to thousands of adoring fans. She’s about to debut on The Tonight Show in America, hopefully a breakout performance for her career. But right now? She’s in her fancy hotel, trying to fall asleep but dying for a hamburger.
11:00 p.m.: Jack is sneaking into a fancy hotel, on assignment for his tabloid job that he keeps secret from his parents. On his way out of the hotel, he runs into a girl wearing slippers, a girl who is single-mindedly determined to find a hamburger. She looks kind of familiar. She’s very cute. He’s maybe curious.
12:00 a.m.: Nothing will ever be the same.
With her trademark humor and voice, Maurene Goo delivers a sparkling story of taking a chance on love―and finding yourself along the way.
~~~~~~~~~~~~~~~~~~~~~

This felt like a total meet cute book.  Lucky, the lady of the story, comes out of her room in search of food because her manager never lets her eat real food. She stumbles across Jack, a tabloid employee (read paparazzi) in search of a story.  He doesn't realize who she is at first, because she's not wearing her usual wig, makeup, etc.  What follows is a meet-cute romcom that is just as adorable as Maurene Goo's other books.


The Characters:
Lucky (or Fern!) and Jack were wonderfully written and well developed characters. The side characters were great as well, but there weren't really any standout secondary characters.  What I mean is, they were there, but they were just kind of fillers put in to help move the story from beginning to end - they didn't have to be well developed because they weren't *that* important.  And it worked for this book.

There was some good development with Lucky especially because the book showed how she struggled with the fame that comes with being a famous pop star, and her feelings about if she wanted to keep doing that or not.  She gets homesick, she misses her family, but she loved doing K-Pop and that was all she wanted when she was younger.  I will obviously never know what it's like to be a K-Pop star, but it was interesting to learn about it from Lucky's life and see what her struggles were like as part of that life.

I think Jack had some good development in the story. He was this obsessed photographer who has to get these photos of famous people, and you see him making small changes and realizations even through the short time that he and Lucky knew each other - like when they are eating shawarma and he realized he just couldn't keep badgering her about her forced diet because he realized she had all the feelings and hated the diet she had to be on, and he didn't feel it was right to disrespect her like that.


The Plot/Story:
The whole plot was just cute and well developed.  The writing is good, and the story kept me hooked from beginning to end.  I don't know much about K-Pop, so it was interesting to learn a bit more about that as well.  This is a delightfully written, well developed story that teens (and YA loving adults) will totally enjoy.


The Cover:
I have to mention the cover.  The covers of Maurene Goo's book are always pretty simple and clean: BUT I LOVE IT!  I think it works, and fits with the whole book so, so well.

And if you've already read this book, let know what you think in the comments.
Posted by Maggie at 9:14 AM

Email ThisBlogThis!Share to TwitterShare to FacebookShare to Pinterest
Labels: Maurene Goo, Somewhere Only We Know