The Rules of Magic - Alice Hoffman 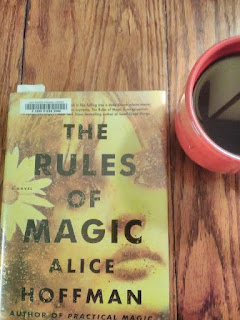 For the Owens family, love is a curse that began in 1620, when Maria Owens was charged with witchery for loving the wrong man.

Hundreds of years later, in New York City at the cusp of the sixties, when the whole world is about to change, Susanna Owens knows that her three children are dangerously unique. Difficult Franny, with skin as pale as milk and blood red hair, shy and beautiful Jet, who can read other people’s thoughts, and charismatic Vincent, who began looking for trouble on the day he could walk.

From the start Susanna sets down rules for her children: No walking in the moonlight, no red shoes, no wearing black, no cats, no crows, no candles, no books about magic. And most importantly, never, ever, fall in love. But when her children visit their Aunt Isabelle, in the small Massachusetts town where the Owens family has been blamed for everything that has ever gone wrong, they uncover family secrets and begin to understand the truth of who they are. Back in New York City each begins a risky journey as they try to escape the family curse.

The Rules of Magic is a prequel to the book Practical Magic, and follows the stories of Jet, Frannie, and their brother Vincent while they are young.

This novel had many magical aspects that made it very enchanting and fun to follow.   There was one thing that happened near the beginning of the novel that nearly made me stop reading though. One of the characters has this trait of being irresistible to others romantically.  So many people are attracted to him,  and one of his aunts neighbors uses that to her advantage and does stuff with him that no adult should ever do with a 14 year old child.  The authorities have used this as a chance to speak out against rape and sexual abuse against minors, but she didn't.  She should have because iny mind there is no reason a grown ass adult should ever be doing that with a child.  A leaning opportunity was sorely missed.

All that being said,  there were many things I did enjoy about this book.  I feel that the way the siblings learned about their magic in their own ways was good.  Their learning about who they are and coming of age as witches was well developed.

I liked that this book had different settings and that the kids traveled and spent time at their aunt's house as well - I think having the story split between NYC and their aunt's house was good for the development of this story because it gives readers the chance to see what they kids are like in their home and in a different place.

Overall, I don't know that I would read this again, but it was a decent book and if you like magical realism you will probably enjoy this book.


Okay reader friends, have you read this book?  Let me know what you thought in the comments below.
Posted by Maggie at 10:42 AM