Over the Top - Jonathan Van Ness 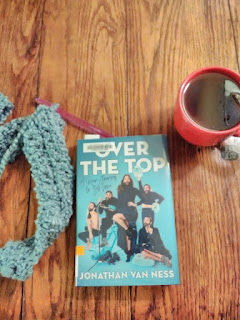 The truth is, it hasn't always been gorgeous for this beacon of positivity and joy.

Before he stole our hearts as the grooming and self-care expert on Netflix's hit show Queer Eye, Jonathan was growing up in a small Midwestern town that didn't understand why he was so…over the top. From choreographed carpet figure skating routines to the unavoidable fact that he was Just. So. Gay., Jonathan was an easy target and endured years of judgement, ridicule and trauma—yet none of it crushed his uniquely effervescent spirit.

Over the Top uncovers the pain and passion it took to end up becoming the model of self-love and acceptance that Jonathan is today. In this revelatory, raw, and rambunctious memoir, Jonathan shares never-before-told secrets and reveals sides of himself that the public has never seen. JVN fans may think they know the man behind the stiletto heels, the crop tops, and the iconic sayings, but there's much more to him than meets the Queer Eye.

You'll notice I did not give this book a rating. Well.  Look - I adore JVN. I think he is one wonderful classy dude.  And I loved most of this book.  BUT, I feel like it is so hard to rate someone's memoir - I mean how the hell do you rate a story about somebody's life?!

So, let's just say I loved JVN's story, and even though parts of this book were a bit clunky, I think it's good that he had the guts to share a part of his life that people are still very judgmental about. (I mean come on, it's 2019 - can we, for the love of all that is good in this world, stop treating people like crap just because they have HIV?!)

Anyway - if you've every watched the Queer Eye show on the Netflix you already know who Jonathan Van Ness is.  His fabulousness just sort of explodes any time he is talking with people about their hair and skin care stuff.

But Honesty Time: I felt like JVN did use humor as way to avoid actually going to deep into his life in some places.  Like when he was talking about his childhood - and getting just to the edge of what it was like growing up in a small midwest town as a gay person, and he'd make hints about that, but stop before actually delving too deep into what that was like.

I think the biggest thing (that was pointed out in another review I read as well) is that JVN is not a writer - and this felt like he was just taking the way he would talk and putting it on paper without much change.  It made the book feel like I was being talked to by some random person about JVN's life, instead of actually having this well written story about his life.  I know it takes a lot of strength and guts to share your life with someone - especially, like I said, in a society that still strongly judges people (and especially gay men) who are HIV+.  But I felt like a good editor could have really helped JVN make this book not just a story but a really well written book.

So: Long story short: I adore JVN, and I liked his book and learning more about him. But the book itself could have been better edited and more well written.
Posted by Maggie at 9:44 AM No comments:

Email ThisBlogThis!Share to TwitterShare to FacebookShare to Pinterest
Labels: Jonathan Van ness, JVN, Over the Top 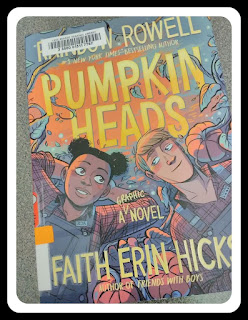 But this Halloween is different—Josiah and Deja are finally seniors, and this is their last season at the pumpkin patch. Their last shift together. Their last good-bye.

Josiah’s ready to spend the whole night feeling melancholy about it. Deja isn’t ready to let him. She’s got a plan: What if—instead of moping and the usual slinging lima beans down at the Succotash Hut—they went out with a bang? They could see all the sights! Taste all the snacks! And Josiah could finally talk to that cute girl he’s been mooning over for three years . . .

What if their last shift was an adventure?

I've enjoyed a couple of books by Rainbow Rowell. However, this one was just fair reading to me.  It wasn't my favorite book by her - though it certainly had it's merits.

Faith Hicks art throughout the book was lovely and well done.  I really enjoyed seeing her work throughout this book.

The dialogue was good, and the banter between the friends felt real. I appreciated that even though Deja and Josiah only saw each other 2 months out of the year, they still had this great friendship with each other. Friends don't need to see each other every day to still have a good relationship with each other.

I thought it was a little odd that they would be able to just leave their post at work and run around the entire evening without getting reprimanded.  I mean, sure - it's their last night and they are teenagers who want to have fun. But when you're at work, you should be doing your job?  You can still find a way to have fun without just abandoning your job.

The theme for the book was super cute. I liked how fallish it is - Autumn is the perfect season after all!  Fight me - I dare you.

Since this book was so short (in the sense that it only took place over the course of a few hours) there wasn't really room for much character development. That being said, it *was* nice to see that Josiah had the chance to meet his crush - the fudge stand girl - and realize that she wasn't really his type after all.  I won't say anything more than that, because you should find out how cute the ending is on  your own.

Overall, this was a perfectly cute fall read. If you like graphic novels, and Rainbow Rowell, you'll likely enjoy this book.

If you have already read this book, let me know what you thought of it in the comments! 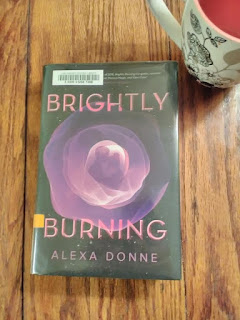 
~~~~~~~~~~~~~~~~~~~~~~~~~~~~~
Seventeen-year-old Stella Ainsley wants just one thing: to go somewhere—anywhere—else. Her home is a floundering spaceship that offers few prospects, having been orbiting an ice-encased Earth for two hundred years. When a private ship hires her as a governess, Stella jumps at the chance. The captain of the Rochester, nineteen-year-old Hugo Fairfax, is notorious throughout the fleet for being a moody recluse and a drunk. But with Stella he’s kind.

But the Rochester harbors secrets: Stella is certain someone is trying to kill Hugo, and the more she discovers, the more questions she has about his role in a conspiracy threatening the fleet.
~~~~~~~~~~~~~~~~~~~~~~~~~~~~~
SPOILER ALERT: This review has spoilers, so, I guess don't read the review until later if you don't like spoilers.

I started out really enjoying this book. By the time I finished, I felt like I had just trudged through 50000 pounds of quicksand AND the fire swamp from The Princess Bride AND the bog of eternal stench from Labyrinth.

This book is a futuristic retelling of Jane Eyre.  Cool, right?  Well, turns out, not so much.

Anyway, let's break this book down.

The Characters: were about as well written and well developed as a bag of bricks.  They were all flat and uninteresting.  There was nothing about any of the characters that I found to be special or that made them stand out to me.  They were stock characters with limited traits, and they had limited growth throughout the book.

The plot was predictable and boring. There wasn't really much of a surprise as to what would happen, and there were too many things that felt forced, like they were added to the story just for the sake of being there, and not for any real purpose.

I found it unrealistic that the *only* books they would read were books from at least 200 years in the past or older.  Now, I like me a good classic - I love classics.  But, I love modern books as well.  However, this book only mentioned books like Harry Potter, all the way back to books that are classics in our current time of 2019.  They did not mention any new books that people might enjoy during their time period.  That didn't feel very well planned out to me. People read classics, yes, and classics are important, but to me it just isn't realistic that these are the only books people would read.

I thought a few things were a little unrealistic - like the fact that people in this society suddenly only usually live to be around 35, maybe 40. (Unless you are a worker on the Rochester. Then apparently you live past middle age.) I would think that in such an advanced time period they would have found a way for people to live for more time, not less, but that's just me.  Also, what's with treating a bunch of teenagers like they are old maids if they are not married off by the time they are 18!?! As if a person's entire identity is tied up in whether or not they are married?  People are more important than that, and shouldn't be treated like the only thing that matters is landing a spouse.

Overall, this book ended up being a bit of a dud for me - read it if you want, but don't go into it with high expectations 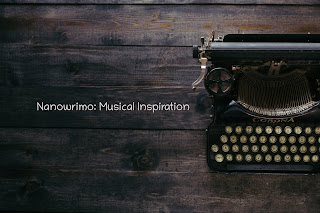 This post is not at all related to reading, but it is related to books so it still counts right?!

I DECIDED TO DO NANOWRIMO! (at the very, very last minute.)  I've had a project idea rolling around in my head for a while, and lately I haven't been feeling very motivated to write.  So, I thought I would do Nano again, and give my writing slump a kick in the butt.

So: Some years I am super motivated to do NanoWrimo, and some years I don't even think about it.  So I have been around the nano community for years, but haven't completed many projects.  This year I am going to go all the way!  The point is, since the last time I did Nano, things have changed around their site a bit, they've added features, they've changed things up a bit.  Which is cool.  One thing they give you an option to do is add a playlist for your book!  And I thought - Hey, Awesome!  I love music.

So, here are some songs that my character (and myself....) would love!