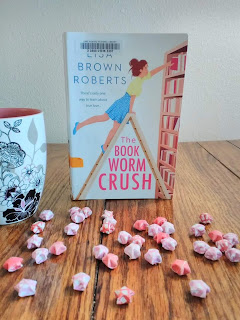 
~~~~~~~~~~~~~~~~~~~~~~~~~
Shy bookworm Amy McIntyre is about to compete for the chance to interview her favorite author, who hasn't spoken to the press in years. The only way to win is to step out of the shadows and into the spotlight, but that level of confidence has never come easy.
The solution? A competition coach. The problem? The best person for the job is the guy she's secretly crushing on...local surfer celebrity Toff Nichols.
He’s a player. He’s a heartthrob. He makes her forget basic things, like how to breathe. How can she feel any confidence around him?
To her surprise, Toff agrees to help. And he’s an excellent teacher. Amy feels braver—maybe even brave enough to admit her feelings for him. When their late night practices become less about coaching and more about making out, Amy’s newfound confidence wavers.
But does Toff really like her or is this just another lesson?
~~~~~~~~~~~~~~~~~~~~~~~~~

I picked this book up after hearing so many people in the bookish community rave about it.  I thought "Hey, a book about someone who loves to read and has their own book blog! Awesome!"

What I got into felt more like a steaming pile of meh.

This book certainly had a cute premise - a shy bookworm enters a contest and has to increase her social media following to have a chance to win, and in the process gets a chance to hang with someone she has a crush on while he coaches her to be more outgoing and get more followers.  What we have is a book that isn't as well written as it could be and, to me, has some content that probably shouldn't be in a book marketed towards young adults.  I mean, look, I know teens can handle a lot.  They are smart and capable, and many times they read books for adults as well.  That doesn't mean that they should have content in their books that is much more mature than they are.

I did like the relationship between Amy and her brother - I think the author caught the sibling relationship very well.  I also really liked that the parents were present and active in their kids lives in this book. I've noticed a lot of books lately that have absent parents in books - and to that I say, just because teens are getting older doesn't mean they don't need their parents!

I also really loved that even though Amy had this huge crush on Toff she didn't just give up her friendship with Viv once Amy and Toff started spending more time together, and "dating"/dating.  Too often people get caught up in romantic relationships and leave their friendships at the side.

So far you're probably thinking - okay you loved some of the relationships, so what didn't you like.

In addition, I felt like Toff was too selfish and didn't really care about anyone by himself.  I know teens can be very focused on themselves - it's the way their brain chemistry works.  BUT, even teens can learn how to focus on others more and develop a sense of awareness about people other than themselves - especially older teens.

I also felt like the writing was subpar, even for a YA book. I've said it before and I'll say it again - teenagers are smart, so write books that treat them as smart!

Okay reader friends - I am curious to know what you thought of this book. If you've read it, drop a comment down below!
Posted by Maggie at 8:30 AM