What To Say Next - Julie Buxbaum 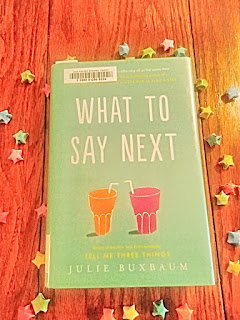 
~~~~~~~~~~~~~~~~~~~~~~
Two struggling teenagers find an unexpected connection just when they need it most.
Sometimes a new perspective is all that is needed to make sense of the world.
KIT: I don’t know why I decide not to sit with Annie and Violet at lunch. It feels like no one here gets what I’m going through. How could they? I don’t even understand.
DAVID: In the 622 days I’ve attended Mapleview High, Kit Lowell is the first person to sit at my lunch table. I mean, I’ve never once sat with someone until now. “So your dad is dead,” I say to Kit, because this is a fact I’ve recently learned about her.
When an unlikely friendship is sparked between relatively popular Kit Lowell and socially isolated David Drucker, everyone is surprised, most of all Kit and David. Kit appreciates David’s blunt honesty—in fact, she finds it bizarrely refreshing. David welcomes Kit’s attention and her inquisitive nature. When she asks for his help figuring out the how and why of her dad’s tragic car accident, David is all in. But neither of them can predict what they’ll find. Can their friendship survive the truth?
~~~~~~~~~~~~~~~~~~~~~~

I went into this book with so much hope. So, so much now misguided hope.  I left this book more disappointed than I've been with a book in a long, long time.

I thought this book would have some good direction with the autism rep featured in the novel.  I was interested that the author also included a bi-racial Indian character and drew from her experience as the wife of an Indian man and mother to two bi-racial children. The author said, in fact, that part of the reason she created Kit as a bi-racial Indian kid is because she wanted her kids to see characters in books that look like them. That is fantastic. I mean truly wonderful.  Every kid should be able to consume media featuring people who look like them!  The only thing that left a niggling feeling in my brain was that the author talks about how Kit's dad's parents are "subtly racist towards white people...."  And, well, that's not a thing?

Now, I want to be clear: There were things I liked about this book.  There really were. I really liked the dialogue between Kit and David in this book.  They had really great banter and conversations with each other. I liked that David's parents just accepted and loved all of him for exactly who he was.  They didn't look at him like there was something wrong with him, because they knew there was nothing wrong with him.  He was autistic, but he was there kid and they loved him like any other person should.

But boy were there some issues with this book.  David's sister Miney (Lauren) was an issue. She was the one who was absolutely convinced that David needed a makeover. She was the one who made him change his clothes and hair. She was the one who had an issue with the way he dressed, even though the way he dressed was comfortable for him. I had a big issue with this because A: It says that there is something wrong with the way David looks, and there's nothing wrong with the way he looks, and B: It says he shouldn't be able to dress in a way that is comfortable for him.   It also shows that perhaps Miney is not as accepting of her brother as she should be. Sure, she does a great job helping him with his notebook so that he can have an easier time navigating high school. But trying to change the dress thing and his hair and all that speaks so much more about how she views him.

Also, the bullying in this book is just off the charts - AND NOTHING GETS DONE ABOUT IT. When David was in middle school a bunch of kids shoved is  head in a shit filled toilet (yes, you read that right) and they didn't get punished - at all.  No punishment.  Yet they go to a school that claims to have a zero tolerance policy for bullying.  Then, in current time where this book is placed, two boys steal David's notebook and scan it into a computer and post it online for all the school to read.  THEN THEY ALL SEND HIM DEATH THREATS.  Like, not just one threat, and not just from one person.  Multiple people send him various messages telling him he should die, and that he should just kill himself.  And then the principal, who should be standing up for all students and fighting against bullying, has the nerve to call David and his parents to the office to tell them that David should be the one to leave school. The principal tells them that this school just isn't a good fit for David.  SO, David gets bullied, and has kids tell him to kill himself, then defends himself against these threats, and he's the one who gets in trouble - because that totally makes sense.

So, overall, this was THE WORST BOOK I've read this year so far.  It's only January, so things may change, but this book was not worth it.  Poor character development, a horrible story line, and a poorly executed story made this not even worth the paper it was printed on.

Save your time and read something else that has more positive rep in it, and actually handle bullying situations better.
Posted by Maggie at 10:14 AM

Email ThisBlogThis!Share to TwitterShare to FacebookShare to Pinterest
Labels: Julie Buxbaum, What to Say next