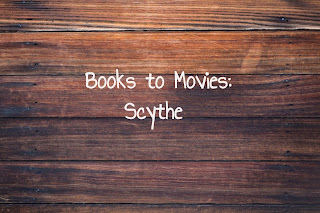 Hey reader friends!  Today starts a new feature on my blog called Books to Movies.  I take a book I'm reading or have read and imagine who I think would be great in the movie.  After all, we all know Hollywood loves to take books and turn them into movies.

So, here are the five really main people from I'd pick to play in a movie version of Scythe. (Rumor has it this is already being made into a movie, but let me dream, okay?!)

Rowan - This dude is, so far, my least favorite character in the book.  That being said, he's a major player, and has to have a movie counterpart. Also, while I'm not sure I'm really digging this dude yet, I do think that he has a keen sense of empathy that would totally help him be a good scythe.

If there were one actor who could play this part well, I think it would be

Citra - I like Citra for the most part. She's got some sass and attitude, sure, but I think that will benefit her.

Brighton Sharbino would, without a doubt, be my number one choice to play Citra in the Scythe movie.  (If you're not sure who she is - she played Lizzie, the girl Carol killed on The Walking Dead.)

Scythe Faraday - I both love and hate Scythe Faraday. I'd say it's like 55% love, 45% hate. That might change.  We'll see.  He's intriguing and sort of morbid, which works.

The perfect guy to play Scythe Faraday is absolutely Daniel Sheehan.  If you're not sure who that is - you're not alone.  But after I saw a pic of him, I knew he'd be perfect as this character.  Go check out his Facebook page and you'll see what I mean!


Scythe Goddard - Okay, okay, I lied!  SCYTHE GODDARD IS A BEAST AND MY LEAST FAVORITE PERSON IN ALL THE SCYTHEDOM.

Scythe Goddard is the worst human ever - and that is why this character HAS TO BE PLAYED by one David Tennant.  Now, look y'all - I love David Tennant. So much.  I mean, the Doctor, Barty Crouch Jr, Killgrave - this guy did those characters and so many more so, so well.  There are so many actors who could play Goddard well, but I'd pick David Tennant just because I know he's done so well in his creepy roles.

Scythe Curie - I'm not 100 percent certain how I feel about Scythe Curie yet. But I do know this: She has to be played by one Meryl Streep.  Can't you just see it?!  COME ON!