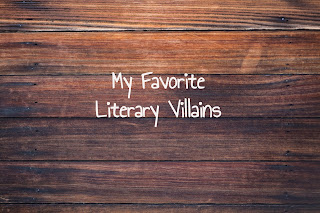 Hey reader friends.  I thought it would be fun today to do a post about my favorite villains.  I won't even ramble: Let's just jump right in.

Okay, so the whole WICKED organization is pretty terrible, right?  They took a whole bunch of kids and locked them up in these mazes and left them there to fend for themselves and then set them loose in a desecrated burned out city to fight their way to a cure for whatever was plaguing their society.  BUT, there was also the side that showed they were at least trying to find a cure for what was going on in their world.

Vizzini is like one of those villains who is so, so unintelligent that you have to wonder if he even knows enough to be a proper villain.  And that is why he is on my short list of favorite literary villains. He's just to easy to beat, and almost a bit like the jokers of times past.

Draco was a smug, arrogant little shit throughout like most of the Harry Potter series. I think we can all agree on that.  But, the kid was so smart. Much smarter than his classmates and others gave him credit for.  Even though there were times when I really wanted to just punch him right in the face, in the end, I did grow to believe that he was just a scared kid who was a product of his environment. I mean, imagine growing up with Lucius Malfoy as your dad, and had a Black for a mother and an aunt.

You read that right friends - I said Dumbledore.  Let me explain, okay?  Yeah, sure Dumbledore had that whole wise old man, love of teaching thing, delivering Harry to his aunt and uncles house to keep him safe thing down.  But did he genuinely care about all his students?  Did he not spend how many years manipulating Harry so that he (Dumbledore) could work things out in his favor?  Did Dumbledore not spend time colluding with a known death eater, and putting said death eater in a position of power claiming it was to "keep an eye on him."  I mean, sure, that was probably part of the reason, but he also needed and used Snape to his own advantage over and over and over again throughout the series.  That being said, Dumbledore is my favorite sort of almost villain, and I do like him about 80 % of the time.  (I may change my mind again later, but for now, that's where I stand.)