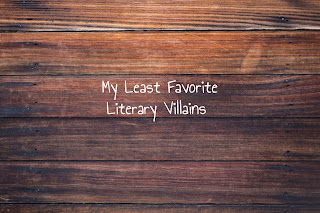 This pink loving, kid hating witch deserved every single bad thing that happened to her.  That time Grawp scared the shit out of her?  Deserved it.  That time the centaurs carried her off while she was screaming about how she hates kids?  They should have done even more to her.  Fred and George interrupting her OWL exams to light off fireworks? TOTALLY AWESOME and totally deserved.  Umbridge should have had so much more bad stuff happen to her.

I know a lot of people LOVE Snape.  I, personally, don't get it. He's a child abuser and a (not at all reformed) death eater, and even though so many people swear he's reformed I don't buy that shit for one single second.  He is always prancing around with his nose in the air acting like he is so much better than everyone else, and sure some people are just going to be snobs. But the fact that he also treats the students of Hogwarts horribly - he makes fun of Harry on the first day of classes, and in front of other students. He refuses to let Hermione get her teeth fixed when that spell goes awry. He repeatedly watches Draco and friends bullying Harry and does nothing about it. He calls Hermione an insufferable know-it-all, and in front of other students at that.  There is so, so much more he's done. He deserves to be a worst literary villain.

Y'all come on - if you don't agree with this one, I can't even talk to you anymore!  He killed James and Lily, he tried to kill Harry when Harry was just a baby, he turned himself into a cult leader and developed a legion of followers who were just as fanatical about killing and torturing people as he was. He recruited a teenager who was still a student at Hogwarts, then convinced said teen that HE HAD TO BE THE ONE TO KILL DUMBLEDORE!

Fucked her brother, had children with him, raised those children as though they belonged to her husband, raised her children with minimal discipline and acted like the sun shone out of their asses.  It's no wonder Joffrey grew up to be such an entitled ass. Also, like, she and her brother were entirely responsible for Bran's "accident." WHO DOES THAT TO A KID?!  She was manipulative to Sansa Stark, convincing Sansa to marry Joffrey and then showing Joffrey off to other women when she suddenly felt like Sansa wasn't good enough, and she wonders why people hated her. Actually she probably knew exactly why and just didn't care.

Responsible for the beheading of Ned Stark, allowed his men to hit and thus physically abuse Sansa (because he was told he could never hit her because a king never hits his queen), called for the death of many people because someone threw cow poop at his face, and ordered the death of all his fathers' illegitmate children.  The list goes on, and on, and on.  Is it any wonder that Joffrey would be on a list of least favorite villains?  Not only is he one of my least favorite characters, he's one that I genuinely hate.  I mean loathe with every fiber of my being.  I can't think of a single character I hate as much as him (and that's pretty impressive, because I really hated Snape.)

He happily continued the hunger games during his presidency and pitted 24 children against each other to commit murder.  He basically forced Peeta and Katniss into being a couple in catching fire, because dude's not as laid back and cool as one initially thinks he is.  He found subtle ways to torture Katniss after the Hunger games were over (the quarter quell, the rose in her house.....).  He showed no remorse about his part in the games.  One could argue that he was a product of his time and of a corrupt government. But there are many politicians and people who don't turn into what he did.  Sure, he grew up thinking that was acceptable.  But if he had been a morally strong person who actually cared, I would argue that he wouldn't have turned into such a fucking dictator.