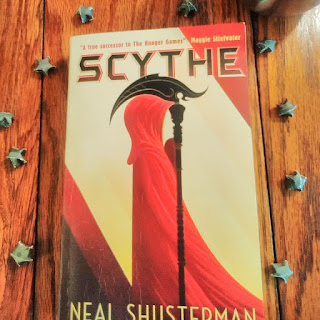 
~~~~~~~~~~~~~~~~~~~~~~~~~~
Thou shalt kill.A world with no hunger, no disease, no war, no misery. Humanity has conquered all those things, and has even conquered death. Now scythes are the only ones who can end life—and they are commanded to do so, in order to keep the size of the population under control.Citra and Rowan are chosen to apprentice to a scythe—a role that neither wants. These teens must master the “art” of taking life, knowing that the consequence of failure could mean losing their own.
~~~~~~~~~~~~~~~~~~~~~~~~~~

This book starts off with a bang - Scythe Faraday shows up, gleans Citra's neighbor, leaves, gleans a kid at Rowan's school, and then chooses both of them to be his apprentices.  So, dark beginning, morbid beginning - but we all know what we're getting into with this book. The description literally tells you people are going to die in this book.  The actions and reactions of Citra and Rowan during the beginning chapters of this book are what drew Scythe Faraday to them though.

Anyway, let's get to the real stuff.

Why Did I Love This Book:

*The Characters - There were obviously some characters in this book that I hated with the fire of a million burning suns.  Scythe Goddard and his minions were fucking horrible. They were the worst of the worst, and were the perfect examples of people who should never be allowed to be in positions of power.  However, there were other characters I really loved.  I liked Citra and Rowan a lot - at the beginning of the novel I like Citra more, but I actually came to like Rowan a bit more by the end.  I also really loved Scythes Faraday and Curie.  I think they have a hard job, and it's not at all fun, and even though I hate what they have to do, I think the two of them do it well.

I really liked seeing the growth and maturity that developed in both Citra and Rowan throughout the book.  Some book group buddies and I were talking about how these two were at the beginning of the novel - and  I agree that Citra seemed a bit more one dimensional and flat at the beginning of the book. I feel like she really grew into her part as a potential scythe by the end, and really developed a bit more personality and had some real growth.  Rowan REALLY developed a lot by the end of the book - he was almost unrecognizable from who he was at the beginning, but I feel like that's a good thing, and I feel like it fits for him.

* The Moral Greyness of the book - this is a book that is really tough in terms of it's morals and ethics.  I mean, these people have figured out how to be immortal, how to cure every single thing, and how to prevent death.  People don't die unless a scythe gleans them.  And every scythe has their own way of doing it. Is there a right way?  Is there a wrong way?  One could argue that the way Scythe Goddard and his followers glean is just cruel (and honestly, I would agree with them.) But in a world where all scythes have to kill in some way, what really is the best way?  That moral greyness works for this story.  The world is not always black and white.  The world is complex, and this story shows that, even if it is in rather an extreme way.

*The story development - this whole story was just amazing. The idea of a society that has conquered death, and must find another way to control the population is really fascinating to me.  I love a good dystopian in general, and THIS IS A GOOD DYSTOPIAN! Shusterman does a great job taking this story from where it was in the beginning and showing the readers all the complexities that go along with a society like this.  Their are so many things to consider in a society like this, and the author does a great job of making the reader look at all sides of things and creates a world that you kind of both hate and want to be a part of.

Things That Really Stood Out to Me Or That I just Found Interesting:

*Scythe Curie is a rather interesting scythe, and I think I found her the most fascinating just because if the way she chose to glean people.
*They have professional partiers.  Like this society literally has people who are paid to go attend parties as professional guests.  I am both fascinated and yet a little horrified by this.
*Speaking of parties, SCYTHE GODDARD'S PARTIES!  They make every other party ever thrown look like a fucking kid's event.
*I'm not sure Citra has as much of what it takes to be a scythe as Rowan does.  She's smart and insightful, but at this point in the series, I have my doubts about her ability to be a good scythe.  We'll see if my opinion changes once I get to the next book.