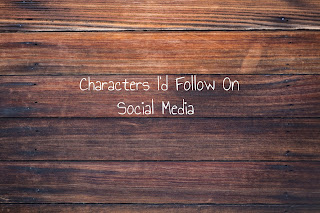 Hi reader friends!  Welcome back to another Top Ten Tuesday - a weekly meme hosted by That Artsy Reader Girl.

This weeks topic is: Characters I'd Follow on Social Media

It should come as no surprise that I'd follow:

Fred Weasley - He's one of the best characters in the book, and were he still alive, his social media would be epic.

George Weasley - See above, except that he is still alive. I'm sure his social media would be hilarious.

Luna Lovegood - She's a little spacey and would surely talk about nargles, wrackspurts, and the quibbler a lot, but she'd be a hoot to follow.

Arya Stark - What better way to learn how a girl should be than to follow Arya Stark?

Jack (From the Wayward Children Series) - This child is weird and so, so messed up, but I love her and I'd be all over her social media.