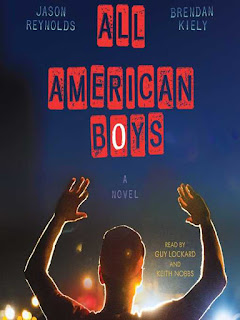 Title: All American Boys
Authors: Jason Reynolds and Brendan Kiely
Format: Audiobook
Rating: 5 Stars
POTENTIAL SPOILERS:
I've tried to keep this review as spoiler free as possible, but a few things have slipped in. Read at your own caution.
~~~~~~~~~~~~~~~~~~~~~~
Rashad is absent again today.That’s the sidewalk graffiti that started it all…Well, no, actually, a lady tripping over Rashad at the store, making him drop a bag of chips, was what started it all. Because it didn’t matter what Rashad said next—that it was an accident, that he wasn’t stealing—the cop just kept pounding him. Over and over, pummeling him into the pavement. So then Rashad, an ROTC kid with mad art skills, was absent again…and again…stuck in a hospital room. Why? Because it looked like he was stealing. And he was a black kid in baggy clothes. So he must have been stealing.And that’s how it started.And that’s what Quinn, a white kid, saw. He saw his best friend’s older brother beating the daylights out of a classmate. At first Quinn doesn’t tell a soul…He’s not even sure he understands it. And does it matter? The whole thing was caught on camera, anyway. But when the school—and nation—start to divide on what happens, blame spreads like wildfire fed by ugly words like “racism” and “police brutality.” Quinn realizes he’s got to understand it, because, bystander or not, he’s a part of history. He just has to figure out what side of history that will be.Rashad and Quinn—one black, one white, both American—face the unspeakable truth that racism and prejudice didn’t die after the civil rights movement. There’s a future at stake, a future where no one else will have to be absent because of police brutality. They just have to risk everything to change the world.Cuz that’s how it can end.
~~~~~~~~~~~~~~~~~~~~~~
All American Boys is THE BOOK you all need to be reading right now.  Put it on your list right beside The Hate U Give by Angie Thomas, because those books are both so powerful and so relevant to where we still are in the US right now.

This book is a powerhouse of a book that will keep you hooked from the very first page. It explores the dynamics of race and the tension between black and white people, and black people and cops so, so well.
You've read the summary above. Perhaps you've even read this book. So I won't go into more detail about what this book is about.  Let's just jump right in to my review.
I feel like I don't even know where to start with this book. I loved every single second of this book. Every. Single. Second.  Wait - that's a small lie. I really hated that we never find out what happened to Paul at the end.  I didn't like that part.  And while I may not have loved the way that Rashad's dad treated Rashad throughout this book, I loved watching the dad's character development right up to the end where he finally, finally realized his son's were standing up for the right thing.
I was absolutely heartbroken for Rashad reading about what Paul did to him, and I am heartbroken for every single person who has to be hurt and many times killed because of police brutality.  It breaks my heart that Rashad and his friends live a time when police brutality not only still exists but is getting worse.  It breaks my heart that these kids are surrounded by people who think that "not all cops" do this stuff, and that "not all cops" are bad cops.  Not review related at all: My thoughts on that sentiment are: If you claim to be a good cop, but you let police brutality for any reason slide, you are not a good cop.  Stand up and do the right thing!
I really loved watching the development of these characters. I feel like the authors nailed what it's like to be a black kid living in fear every single day, and to be that white kid on the other side growing and realizing that the treatment of black people at the hands of police and other people is not okay.  Rashad really seemed to struggle at the beginning with whether or not he wanted to march with his friends and brother when he got out of the hospital, but it just took a small amount of persuasion to convince him to march.  And thank goodness he did. It was just so amazing to watch him go from this uncertain kid who hated the cop but wasn't sure what to do about it, to this strong kid who stood up for himself and others in the best way!
Quinn's story as well was amazing. Quinn is a white kid that goes to Rashad's school and plays on a basketball team with a bunch of people who happen to be friends with Rashad.  Quinn's friend Guzo is also on the team and his Guzo's brother just happens to be Paul the bastard cop.  Quinn and Guzo have been friends for so long that everyone in their families considers each other part of their own families.  They do so much together, and everyone just assumes that when Paul beats the shit out of Rashad, that Quinn will stand for it.  At first Quinn think he might, but you can see little cracks in his thinking, you can see the way he looks at Paul, you can feel his anger and frustration at what Paul did.  He ends up doing the right thing. He stands up to Paul, Guzo, and everyone else supporting Paul.  I think that shows that he grew during the short time of this book and that he has incredible character.
This whole story, from the very first page, was amazing and heartbreaking. Every single second of this story flowed together and worked together to create a book that is, hands down, THE BEST BOOK I've read this year.  It beats out Scythe.  I loved this book more than Scythe.The story was amazing, the characters were so well written and well developed, and even though the book was shorter (just over 6 hours for the audiobook) it packed such a punch. Every second of this book worked well together, everything made sense, all the characters fit well with one another and each character had a very obvious place in the story.
If the only other book you read this year is All American Boys, you won't be disappointed.
Now, go do the important things. Spread the word about the BLM movement, stand up and be vocal against systemic racism, call out people, and READ THIS BOOK!
BLACK LIVES MATTER: https://blacklivesmatter.com/
JASON REYNOLDS WEBSITE: https://www.jasonwritesbooks.com/
JASON ON TWITTER: https://twitter.com/JasonReynolds83
BRENDAN KIELY'S WEBSITE: https://www.brendankiely.com/
BRENDAN ON TWITTER: https://twitter.com/KielyBrendan
Posted by Maggie at 2:58 PM