Felix Ever After - Kacen Callender 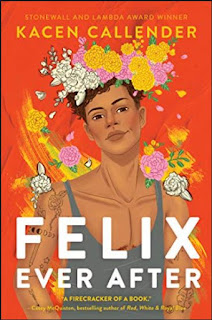 Title: Felix Ever After
Author: Kacen Callender
Format: Hardcover
Rating: 5 Stars
~~~~~~~~~~~~~~~~~~~
From Stonewall and Lambda Award-winning author Kacen Callender comes a revelatory YA novel about a transgender teen grappling with identity and self-discovery while falling in love for the first time.
Felix Love has never been in love—and, yes, he’s painfully aware of the irony. He desperately wants to know what it’s like and why it seems so easy for everyone but him to find someone. What’s worse is that, even though he is proud of his identity, Felix also secretly fears that he’s one marginalization too many—Black, queer, and transgender—to ever get his own happily-ever-after.
When an anonymous student begins sending him transphobic messages—after publicly posting Felix’s deadname alongside images of him before he transitioned—Felix comes up with a plan for revenge. What he didn’t count on: his catfish scenario landing him in a quasi–love triangle....
But as he navigates his complicated feelings, Felix begins a journey of questioning and self-discovery that helps redefine his most important relationship: how he feels about himself.
Felix Ever After is an honest and layered story about identity, falling in love, and recognizing the love you deserve.

So, if you don't know - the basis of the book is Felix being trans and still feeling like he's struggling with his identity, and then being bullied by someone from his school to top it off.  He goes through this book searching to find out who he really is and what he wants in his life.

There were so many things I loved about this book, including:

* Felix's development throughout the story. He is such a sweet kid, and he seems (to me) almost just so shy and timid at times. That seems to lead to some tension, but he learns to voice more of who he is throughout the book.  As he learns more about himself and the people around him, it leads to him being more confident and speaking up for himself even more, which is great!

* The relationship that Felix has with Ezra - it was just wonderful and so supportive (even when Felix was in the whole "Hey I'm catfishing Declan" phase...)

* How the story developed and how each character had a significant roll in Felix's life in some way, even if it wasn't in the best way. Like Marisol stating that Felix is a misogynist because he "chose to stop being a woman." She actually said that, like Felix just chose to be a guy so that makes him a misogynist. And when she gets called out on it, she acts like everyone is targeting her and making her out to be a horrible person - and then she starts going off again about Felix being a woman and that you can't just change like that. I just had it up to the limit with her. It hurt me to know that there could be someone like that who would just treat Felix like that because of who he is.  The shitty thing is though that this stuff does happen in real life - and it needs to be stopped.

* I think this book does a good job of exploring the complications that exist in relationships.  When Declan and Ezra broke up, Declan knew why, even if Felix didn't. And that's why seeing the development of the relationship between Declan and Felix was even more complicated that it could have been.  It started with Felix genuinely believing Declan was the one who put up the pictures, and that creates tension and anger and frustration, but then it leads to Felix continuing to message Declan even after he realizes Declan didn't do it, and that leads to complications of another sort. The story does a great job of following that out and even though I cried my way through this story, I think the way it is written and the way it follows these complications is incredibly well done and incredibly important.

This whole book was filled with a well written story that developed well and had wonderful characters.  The book takes a hard look at what it's like to be a black, queer, trans boy, and damn it Felix went through some shitty things in this book and he came out on the other side knowing he was coming into being the best demiboy he could be, and I loved every second of watching him grow and learn and stand up for himself throughout the book.

Now, reader friends, before you go - let me just say one more thing. This relates to the thoughts I had about Marisol and my god were they bad!  So, she had this whole idea that Felix wasn't a real boy, that he was just pretending and that he was misogynist because of it and all that.  I want to be crystal clear: trans boys are boys, trans girls are girls, and it is absolutely not ever up to us cis folks to determine otherwise.  If you hear someone talking like this about trans folks, please call them out, because it is utter BS.

And finally, reader friends, if you've read this book please drop a comment down below and let me know what you thought of it. I can't wait to hear from you!

Email ThisBlogThis!Share to TwitterShare to FacebookShare to Pinterest
Labels: Felix Ever After, Kacen Callender