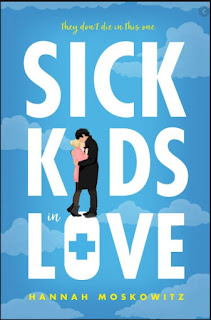 Isabel has one rule: no dating.It's easier--It's safer--It's better----for the other person.She's got issues. She's got secrets. She's got rheumatoid arthritis.But then she meets another sick kid.He's got a chronic illness Isabel's never heard of, something she can't even pronounce. He understands what it means to be sick. He understands her more than her healthy friends. He understands her more than her own father who's a doctor.He's gorgeous, fun, and foul-mouthed. And totally into her.Isabel has one rule: no dating.It's complicated--It's dangerous--It's never felt better----to consider breaking that rule for him.

Considering this book is called Sick Kids In Love, it is remarkably light.  Don't get me wrong - there is a lot of talk about being sick, and about the struggles that come with being sick in a world full of healthy people. But, this book is filled with a lot of levity and hilarity, and that was great.

Ibby has JRA (Jr. Rheumatoid Arthritis) and has spent the majority of her young life being doctored for that.  It's nice to see a book talk about the fact that even kids can get RA.  It's not as common, as RA is most common in adults in their 30's and older, but right now there are 50,000 kids in the US living with JRA.  Anyway - the REVIEW!

I really appreciate that this book explores what it is like to be sick or to have some sort of chronic pain/health issue.  There is still, in 2020, too little knowledge about what it's like to live in pain, to live with health issues every single day. The author really does a great job delving into what arthritis can do to a person's body.  There is a lot of depth and exploration into what a person's body goes through when dealing with chronic health issues.

The author also does a great job of exploring what it's like to be sick when you're surrounded by people who don't deal with any chronic health issues. I know all too well that people without chronic health issues don't understand what it's like to have to fight the urge to even talk about what you're going through at the risk of making someone else uncomfortable.  Ibby really struggles with that with her friends - and while she also starts out the book struggling with the idea of calling herself sick, she also has all these moments where it seems she struggles with not wanting to disappoint her friends. So, she says she'll go skiing, or go to that party, or go out for dinner, even though she may be in a lot of pain. But her friends really struggle to get that as well.

This brings up the issue of character development and growth as well.  In the beginning of the book there was a lot of emotional discomfort. Ibby didn't talk about a lot of stuff that she struggled with because she thought her friends didn't want to hear about it. Her friends didn't bring up a lot of stuff because they didn't know exactly how much pain Ibby was in all the time. So it led to a lot of miscommunication about why Ibby couldn't handle doing stuff.  By the end of the book, she had actually grown in her own views about her JRA, and she had actually taken the time to talk about that with her friends and voice her frustrations. That gave them the chance to open up to her and let her know that it was okay for her to be honest about where she was and what she was going through. Although Ibby did suffer the loss of one friend who just couldn't come to terms with Ibby being sick or having this relationship with a sick boy (there's more to it than that - which basically boiled down to Ibby's friend only hitting on Sasha because she felt bad for him because he has gaucher disease.)

Most of the characters go through great developments and realizations about themselves and that is something I really love about this book.  It's not always a given that characters will grow or develop, so when it happens, I love it.

I love the way this story unfolds.  From the beginning when Ibby meets Sasha while they are getting infusions, to all the moments she sees him while she's candy striping, and pretends that she doesn't like him, but hi it's obvious she does.  I love watching their cuteness together throughout the story, and I love watching that Sasha calls Ibby out and stuff, and reminds Ibby that it's okay to not be okay all the time. They have this great relationship that works, and would work even if they were just friends! I love watching what unfolds between Ibby and her dad as well, and watching her learn that she needs to speak up more towards him and let him know that she needs him.

Overall, this is an adorable read that I think anyone would love!  Go Read It Now! And if you have already read it let me know what you thought of it in the comments.