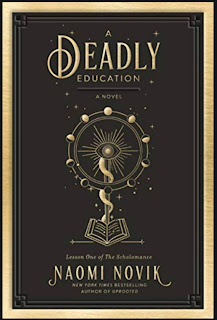 A Deadly Education is set at Scholomance, a school for the magically gifted where failure means certain death (for real) — until one girl, El, begins to unlock its many secrets.

There are no teachers, no holidays, and no friendships, save strategic ones. Survival is more important than any letter grade, for the school won’t allow its students to leave until they graduate… or die! The rules are deceptively simple: Don’t walk the halls alone. And beware of the monsters who lurk everywhere.El is uniquely prepared for the school’s dangers. She may be without allies, but she possesses a dark power strong enough to level mountains and wipe out millions. It would be easy enough for El to defeat the monsters that prowl the school. The problem? Her powerful dark magic might also kill all the other students.

El, short for Galadriel, is a student at Scholomance, a school for students who are magically inclined. When we first meet her she is knee deep in the middle of an attack from a mal, she gets rescued by Orion. However she views it as him letting this thing into her room, and chaos ensues.

They develop an unlikely friendship, mostly because El is convinced at first that he set the monster loose in her room, but also because he keeps volunteering to help with things like going to the shop to get tools.

This book has all the drama you'd expect from a book filled with all teenagers and NO ADULTS.  With that being said, I loved every single second of this book.  I loved it all. The blood, the gore, the monster intestines. Give. Me. More.

The Only Thing I Didn't Like:
*I just found it odd that there were no adults at this school.  Like, they weren't even allowed into the school, it would literally spit out adults. With that being said, I do think that adds a layer of intrigue to the school and to the book. The school, because it's not just a school for magic but also a magical school, teaches them what they need to know, and gives them what they need to (hopefully) get out alive.

I Loved:
*The way the characters interacted with each other - especially Orion and El. They had a weird yet great relationship. They just had chemistry with each other, and even if they had decided to remain only friends it still would have worked. The other characters added even more to the story, even when they were being snotty brats (Hey, every school has those, right...)
* I know guts and gore don't work for everyone but I loved it. This book would not have been the same if it weren't for the mal attacking, and the students ripping them open and killing them.
*This story was well developed and worked so well from beginning to end.  You get thrown into the action right at the beginning, and the whole story just builds from there. The author takes everything and builds on it from beginning to end.
*There was a lot of good character development in this story.  Even though some of the characters have some more work to do on themselves, you could tell there was some sort of effort from them to be or do something with themselves.
*I Loved all the action in this book. I loved that the students always had to be on their toes because they never really knew what was going to happen. There was just this feeling of action and intensity weaving it's way through this book, and it worked.
*I found it intriguing what this school could do, and loved watching the students have to continue to learn and grow with the school because of how it changed from time to time on them.

Tell me reader friends, if you've read this book what did you think?  Are you as anxious for a sequel as I am?  Let me know what you thought in the comments!