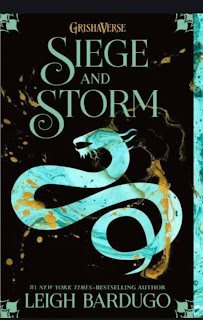 Darkness never dies.Hunted across the True Sea, haunted by the lives she took on the Fold, Alina must try to make a life with Mal in an unfamiliar land, all while keeping her identity as the Sun Summoner a secret. But she can’t outrun her past or her destiny for long.The Darkling has emerged from the Shadow Fold with a terrifying new power and a dangerous plan that will test the very boundaries of the natural world. With the help of a notorious privateer, Alina returns to the country she abandoned, determined to fight the forces gathering against Ravka. But as her power grows, Alina slips deeper into the Darkling’s game of forbidden magic, and farther away from Mal. Somehow, she will have to choose between her country, her power, and the love she always thought would guide her—or risk losing everything to the oncoming storm.

Siege and Storm is certainly a storm.  It is violent, and heartbreaking, and filled with surprises like you wouldn't believe.

Alina Starkov, the sun summoner, has the first amplifier.  She has all the power that goes with that.  And she has a desire for the other two amplifiers.

This book explores loyalty, power, leadership, and friendship in a strong and wonderful way.  It also ripped my heart open and stomped on it.

I feel like this book was so well written and so well developed. The story moves along so well, even during the parts where I was so mad with Alina and the other characters that I wanted to scream. BUT that's a sign this is a good book because I was so drawn in! Every part of this book works so well together - the plot, the characters, the way it all developed. It was absolutely wonderful.

The characters in this book were ah-mazing. They all developed even more in this book than they did in Shadow and Bone, and even though there were things that were frustrating (Alina doesn't really need another fucking amplifier come on!) I loved watching where each character went and I can't want to see what happens in the third book. There were some surprises - the twins claiming allegiance to Alina, but not really; Zoya actually coming around and helping with things, and so much more. And there were some things that we all could have expected - Like Vasily wanting to marry Alina AND Vasily turning out to be a complete and total knob. But even with all that it was wonderful to see what happened with the characters and how they developed as the story went on.

What I really loved:
* Alina
* The way the Grisha mostly came together to do what they needed to do
* The return to the little palace.

What I absolutely didn't like:
* Mal is a control freak and Alina can do better
* Vasily. Just. I can't stand him.
* What did the Darkling do to his own damn mother?! COME ON!
* Alina's determination to get the third amplifier.  She's letting the power of being the sun summoner go to her head.

Overall - this is another homerun of a book, and if, for some reason, you have not read it yet, you need to get on that!

Email ThisBlogThis!Share to TwitterShare to FacebookShare to Pinterest
Labels: Grishaverse, Leigh Bardugo, Siege and Storm, the grisha trilogy, The Grishaverse