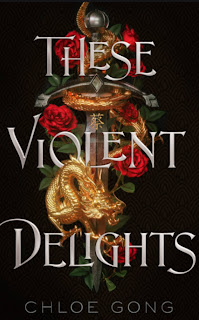 The year is 1926, and Shanghai hums to the tune of debauchery.A blood feud between two gangs runs the streets red, leaving the city helpless in the grip of chaos. At the heart of it all is eighteen-year-old Juliette Cai, a former flapper who has returned to assume her role as the proud heir of the Scarlet Gang—a network of criminals far above the law. Their only rivals in power are the White Flowers, who have fought the Scarlets for generations. And behind every move is their heir, Roma Montagov, Juliette’s first love…and first betrayal.But when gangsters on both sides show signs of instability culminating in clawing their own throats out, the people start to whisper. Of a contagion, a madness. Of a monster in the shadows. As the deaths stack up, Juliette and Roma must set their guns—and grudges—aside and work together, for if they can’t stop this mayhem, then there will be no city left for either to rule.Perfect for fans of The Last Magician and Descendant of the Crane, this heart-stopping debut is an imaginative Romeo and Juliet retelling set in 1920s Shanghai, with rival gangs and a monster in the depths of the Huangpu River.

This retelling of the Shakespeare play Romeo and Juliet is a book that I'd say everyone should get there hands on - especially if you have a thing for 1920's gangsters, love, and a monster that spreads illness and kills people.

I liked that this book took place in the 1920's - I think that fit so well with the rest of the story, and I couldn't imagine it any other way. Gong did a great job of taking a well known and popular play and putting her own twist on it as well.

There was a lot of great buildup and tension through out the book - both between the gangs, and between Roma and Juliette because they realized they still have all those feelings for each other (obviously!) There were hidden things that were foreshadowed and revealed throughout the book that added to the tension as well.  As with any good book, all is not as it seems in the beginning.

I feel like this book did a good job of taking characters we already know and putting a different spin on them.  The author takes these characters that people have known for hundreds of years and turns them into unique, individual people who stand out in their own right.  Each character had their own reasons for doing what they did, and they stood out well even from other characters that were in their own gangs.

I loved the added aspect of this story had with the monster/bugs that spread a plague through the city. It added a layer of depth to a well known story, and helped give the characters a reason to spend time together other than just hating their families.

There was a lot of great back and forth between Roma and Juliette as well. They loved each other, but they denied it, but then they didn't but then this, and it all seems tedious but it worked and built up tension throughout the book.

I liked that this book explored Juliette's cousins as well, and explored why they were who they were and why the could never be in power in the Scarlet gang or Cai family.  I loved the way the author developed Paul's character as well.

Overall, this book was definitely worth reading, and if you haven't gotten to it yet, you really should!

If you have read this book let me know what you thought in the comments.