Before the Devil Breaks You - Libba Bray 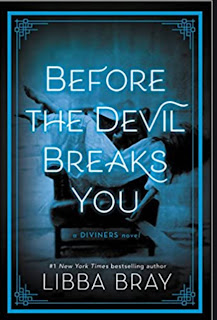 New York City.
1927.
Lights are bright.
Jazz is king.
Parties are wild.
And the dead are coming...After battling a supernatural sleeping sickness that claimed two of their own, the Diviners have had enough lies. They're more determined than ever to uncover the mystery behind their extraordinary powers, even as they face off against an all-new terror. Out on Ward's Island, far from the city's bustle, sits a mental hospital haunted by the lost souls of people long forgotten--ghosts who have unusual and dangerous ties to the man in the stovepipe hat, also known as the King of Crows.With terrible accounts of murder and possession flooding in from all over and New York City on the verge of panic, the Diviners must band together and brave the sinister ghosts invading the asylum, a fight that will bring them face-to-face with the King of Crows. But as the explosive secrets of the past come to light, loyalties and friendships will be tested, love will hang in the balance, and the Diviners will question all that they've ever known. All the while, malevolent forces gather from every corner in a battle for the very soul of a nation--a fight that could claim the Diviners themselves.

There are so many words that I could use to describe my feelings about this book. I'm angry, sad, broken, completely and totally wrecked.

This book was an amazing continuation of the Diviners series. There were many things I loved about this book (and one big thing I HATED!!!!)

The Characters: were absolutely amazing as usual. In this book, they really all started coming into their own even more. They were all so well written and well developed as in the previous books. But in this book, they all seemed to really develop a sense of who they were and what they wanted in life. Evie really started to mature in this book and developed into a young woman is strong and vocal about things. There were a few wishywashy moments, but she's definitely started making more effort on different things. Mabel changed into a young lady who's not afraid to speak for herself even when she's scared as hell. Theta became someone who stood by Memphis even when her ex (sort of) was hounding her and trying to control her life again. And Memphis and Isaiah! Wow these two are becoming so strong and learning so much about how to tell when someone is using them and taking advantage of who they are.  Ling, the dear sweet ace, has become a woman who knows the odds are stacked against here, but who is finding love anyway and learning to trust others in a way she didn't before. All these characters are so special and so important, and I loved watching them grow throughout this book.

The plot of this book was definitely darker than the previous two books in the series. Readers can tell that Libba Bray is gearing up for something intense in The King of Crows. There is so much great buildup and foreshadowing in this book. There is plenty of action and each chapter flows well into the next one. The story is so well written, and the events of the story build up so well to the intense and very climactic ending. Each event builds upon the previous event until it all just blows up in your face.

I loved the way the characters learned to separate themselves from each other as well.  Mabel realized she needed independence from her friends, Theta realized she was having more trouble getting away from her husband than she thought, Memphis found a way to help remedy Mabel's situation, Bill Johnson found a way to extricate himself from a potentially deadly situation in a way that saved two other people as well. It all was so amazing and so well done.

The settings of this book worked well in the context of the book as well. The asylum was the perfect place for these kids to learn about who they were and what they should do for themselves and for each other to keep the city and themselves all safe.  The Hotsie Totsie club, the Museum of the Paranormal, even the radio station Evie worked at. All these places worked together to add to the story and give more depth to what was happening, because so much of these places is built into what these kids want to do to keep more people safe.

This was a wonderful book and if you haven't read it yet, you absolutely need to!  If you have read it, let me know what you thought of it in the comments below!

Email ThisBlogThis!Share to TwitterShare to FacebookShare to Pinterest
Labels: Before the Devil Breaks You, books, Libba Bray, reading, The Diviners, YA books