The House in the Cerulean Sea - TJ Klune 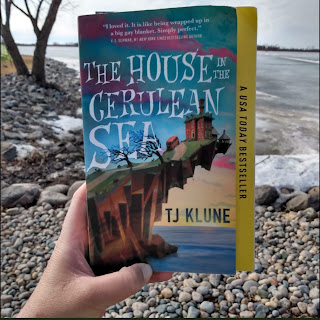 A magical island. A dangerous task. A burning secret.Linus Baker leads a quiet, solitary life. At forty, he lives in a tiny house with a devious cat and his old records. As a Case Worker at the Department in Charge Of Magical Youth, he spends his days overseeing the well-being of children in government-sanctioned orphanages.When Linus is unexpectedly summoned by Extremely Upper Management he's given a curious and highly classified assignment: travel to Marsyas Island Orphanage, where six dangerous children reside: a gnome, a sprite, a wyvern, an unidentifiable green blob, a were-Pomeranian, and the Antichrist. Linus must set aside his fears and determine whether or not they’re likely to bring about the end of days.But the children aren’t the only secret the island keeps. Their caretaker is the charming and enigmatic Arthur Parnassus, who will do anything to keep his wards safe. As Arthur and Linus grow closer, long-held secrets are exposed, and Linus must make a choice: destroy a home or watch the world burn.An enchanting story, masterfully told, The House in the Cerulean Sea is about the profound experience of discovering an unlikely family in an unexpected place—and realizing that family is yours

There are not even enough words to describe how much I love this book. I was drawn in from the moment I started reading, and didn't want this story to ever end.  This book made laugh and broke my heart. Hearing about what the kids had to go through just because they were magical beings was horrifying, but knowing they had Arthur on their side was absolutely wonderful.

The characters in this book were absolutely divine.  I loved the way they spoke, the way they interacted with each other, the way they lived and loved.  The kids were wonderful - so funny and so strong considering what they had all gone through.  Lucy, AKA the Antichrist, was so funny. I laughed so hard when he would talk about the things he wanted to do to Linus. I loved watching the fascination on Linus's face when he met the kids and when he learned everything they could do. The development of the characters was great. Arthur and Linus especially learned so much about themselves over the course of this story. They both learned about why it's so important to be who you are, to fight for what you want. Linus learned to come out of his shell, and to break free from the mundane life he was living before, and that was so good to see.

This story was not only well written, but so well developed. There was so much foreshadowing of things to come in this book, and such a great buildup of the relationship between Arthur and Linus. They were made for each other in so many ways. This book built up tension in so many ways, and it all weaved together into the story and added depth and dimension to an already wonderful book.  It was great to watch the way some of the villagers developed and realized that the kids and Arthur were really great people who deserved to be accepted (Helen kicked ass, and I think Merle cared more than he wanted to let on.)

I loved the magic in this book, and the way the characters each had their own unique thing, Talia the gnome, Phee the sprite, Sam who could turn into a dog, Theodore the wyvern, and the delightful Chauncey who isn't really able to be identified as anything other than a green blob. I love that all these characters come together, live and learn together and grow into wonderful humans under the leadership of the fiery Arthur.  Not only was it easy to tell them apart because of their different species, it was easy to see that they each had such amazing and distinct personalities. The author did a great job of writing characters who are very well developed and distinct from each other, but who know they can and should rely on each other.

I really cannot think of a single thing I don't like about this book. If you haven't read it yet, you need to.  If you have read it, drop a comment down below and let me know what you thought!

Email ThisBlogThis!Share to TwitterShare to FacebookShare to Pinterest
Labels: The House in the Cerulean Sea, TJ Klune