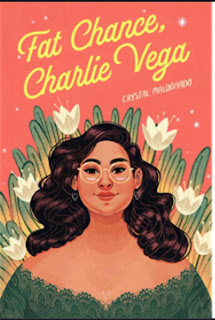 Coming of age as a Fat brown girl in a white Connecticut suburb is hard.
Harder when your whole life is on fire, though.Charlie Vega is a lot of things. Smart. Funny. Artistic. Ambitious. Fat.People sometimes have a problem with that last one. Especially her mom. Charlie wants a good relationship with her body, but it's hard, and her mom leaving a billion weight loss shakes on her dresser doesn't help. The world and everyone in it have ideas about what she should look like: thinner, lighter, slimmer-faced, straighter-haired. Be smaller. Be whiter. Be quieter.But there's one person who's always in Charlie's corner: her best friend Amelia. Slim. Popular. Athletic. Totally dope. So when Charlie starts a tentative relationship with cute classmate Brian, the first worthwhile guy to notice her, everything is perfect until she learns one thing--he asked Amelia out first. So is she his second choice or what? Does he even really see her? UGHHH. Everything is now officially a MESS.A sensitive, funny, and painful coming-of-age story with a wry voice and tons of chisme, Fat Chance, Charlie Vega tackles our relationships to our parents, our bodies, our cultures, and ourselves.

SPOILER ALERT: There are a few minor spoilers, so if you haven't read this book yet, and don't want to know what's going on, read this review later.

I wish books like this had been around when I was a teenager!  I am so grateful that so many authors are writing books that sow that fat people are just people with all the same feelings, thoughts, emotions, likes, dislikes, etc, that every other person has.

So, as you can see from the description, this book follows Charlie Vega, a fat 17 year old who always feels like she's struggling to be noticed, to fit in, to have people pay as much attention to her as they do to her skinny best friend Amelia. Charlie struggles with a lot of insecurity throughout this book, and learns a lot about herself as well.

The growth that Charlie goes through in this book is amazing. She compares herself a lot to Amelia, and struggles with feeling like she always comes in second place to Amelia.  It's so bad that she even breaks up with her boyfriend because he asked Amelia out a year before.  Charlie slowly learns, both from finding her first love, and through really exploring why she feels the way she does, that she is amazing the way she is.

Charlie's best friend Amelia learns so much about herself as well, not the least of which is the fact that she did sort of have a tendency of putting her relationships right out there in front of Charlie. (Granted, it was up to Charlie to love and accept that her friend was in these relationships, and to realize that this meant they could still be friends...)

Charlie's mom was a trip. I'll tell you straight up, she was the one of the only two characters I didn't like.  (The other was Cal. What a jagoff.)  Her mom was so self-centered, and so involved in what she wanted and what made her happy.  She sort of spread that into Charlie because she was always telling Charlie she should lose weight, and always trying to get Charlie to drink these weight loss shakes. After Charlie's dad died, her mom gained weight, and wasn't happy with that. I totally get feeling inadequate, and wanting to be healthier, but for Charlie's mom, she turned that weight loss into basically her entire personality, It took over her life. I feel like part of it was because she was missing her husband, and used the weight loss and the shakes as a way to distract herself after his death.

Brian is probably my favorite character in the book.  He's fun, he's nice, he's so sweet to Charlie.  He is a bit mature for a teen, which is fine, but I did sort of want to see him just act a little more like a teenager sometimes.

I loved the way this story developed and how a lot of the things that happened throughout the book led to the characters like Charlie, learning something about themselves.  This story moves quickly once you get into it, and each event that happens is important to the building up of this story. Cal scamming Charlie, Charlie's mom sort of ragging on Charlie, Charlie finally FINALLY realizing that Brian was so into her - it was all important, and it all led to wonderful things happening in each next part of the novel.

I really love that this book looks at what it's actually like to be a fat kid who doesn't always feel accepted, and really fits in those moments where Charlie looks at things on social media pertaining to the body I wish books like this had been around when I was a teenager!  I am so grateful that so many authors are writing books that sow that fat people are just people with all the same feelings, thoughts, emotions, likes, dislikes, etc, that every other person has.

This book also spent a lot of time exploring the body positive movement and looking at how important that is for young people and older people alike.  Charlie was definitely not the only person who could benefit from that movement (I'm looking at you Charlie's mom!!!)  Charlie learned a lot from looking through the internet at Insta posts by people in the body positive movement.  I feel like that was a big part of her development and why she slowly learned to accept and truly love herself the way she deserves.

Overall, this was a wonderful, well written, insightful novel that everyone should get their hands on!

If you've already read Fat Chance, Charlie Vega, drop a comment below and let me know what you thought of it.

Posted by Maggie at 5:53 PM No comments: 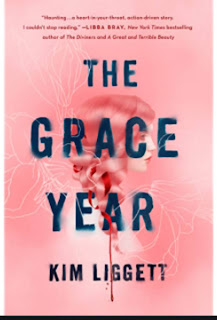 No one speaks of the grace year. It’s forbidden.

In Garner County, girls are told they have the power to lure grown men from their beds, to drive women mad with jealousy. They believe their very skin emits a powerful aphrodisiac, the potent essence of youth, of a girl on the edge of womanhood. That’s why they’re banished for their sixteenth year, to release their magic into the wild so they can return purified and ready for marriage. But not all of them will make it home alive.

Sixteen-year-old Tierney James dreams of a better life—a society that doesn’t pit friend against friend or woman against woman, but as her own grace year draws near, she quickly realizes that it’s not just the brutal elements they must fear. It’s not even the poachers in the woods, men who are waiting for a chance to grab one of the girls in order to make a fortune on the black market. Their greatest threat may very well be each other.

With sharp prose and gritty realism, The Grace Year examines the complex and sometimes twisted relationships between girls, the women they eventually become, and the difficult decisions they make in-between.

This is the only book I've read in recent years that comes close to the incredible story that is The Hunger Games.  Many have tried, many have failed.

The Grace Year sees a county where the adults send all the girls aged 16 out into the outskirts to spend a year ridding themselves of the magic that all girls and women possess.  While there they engage in behaviors that drive themselves and each other to the brink of madness.

This was definitely one of my favorite books for the month of June. Wild, angry, and downright hostile, this book drew me in with its premise and held my attention with its well written characters and dynamic story.

The reason I was gripped by these characters is because they were so well written. They were ferocious, each in their own way, and they had so much about each of themselves that it was so easy for the reader to catch on as to why each one became who she did throughout the book.  From the very beginning, you could tell that each character, including the ones being cast out into the outskirts, was so distinct and so strong in their way.  I could tell why each character was how she was just based off the first couple chapters.  I could see why they were all so scared, yet so commanding in a way.  They were all right there in your face, and I wanted to know what happened to each and every one of them.

There were so many turns in this book.  Each moment played into the next moment very well. There was a lot of good foreshadowing in this book.  The author foreshadows well, and doesn't give too much away though.  You know something is going to happen, but what exactly and when is what you get to find out.  With each twist, you're left thinking that you know how this book is going to end, and then there's another twist, and the author leaves you wondering.

I loved that there were some surprises throughout this book. I could not have suspected exactly what was going to happen between Tierney and Riley, for example, until they actually met in person.  Clearly someone was looking out for Tierney, and it was exciting to learn how and why, and to watch their relationship develop.

The dynamics in each family were interesting as well.  Most of the focus was on Tierney's family, and watching her learn about her parents, and come to the realization that they were not as bad as she thought was interesting.  She had a very one sided view of them based on one thing that she learned, and it took her some time in the wild to realize who they really were and why they did what they did.

The entire idea behind this book and books like it is scary, yet fascinating.  You know people are going to die.  You know some people are probably going to die at the hands of someone else.  And you want to fault whoever does the killing, but it's not the fault of these young girls at all.  They are so brainwashed into believing that what's happening to them is right, and that this is the way.  They are taught their entire lives to look at the grace year as something the have to do because they are dirty, and magical, and because they have to ride themselves of that magic to be proper, suitable wives. As a society, we don't want to think we could ever become like this, and I think that's why these books are so appealing to people.  They take the absolute worst thing that could happen, turn it into a story, and we become fascinated by it.

All that being said, I don't know if we'd ever become as dramatic as books like The Grace Year (or The Hunger Games), but we do need to guard ourselves more as a society and look at the way we treat women and girls, and kids.

All in all, this was a well written wonderful book that I'd recommend to anyone looking for a gripping story. This book does not disappoint.