The Love and Lies of Rukhsana Ali - Sabina Khan 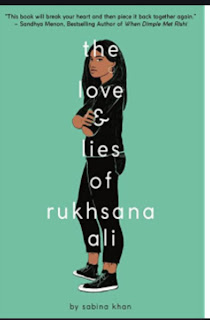 I read this as part of a book group I am in on Facebook, and I didn't know entirely what to expect when I started reading.  I quickly became engrossed in the book, and even with all the crappy things that happen to Rukhsana, I fell in love with the book.  It has such a good message for young people, and it is such an important book for teens to read.

I am going to have a much different perspective on this book because I am not Muslim, but I'll try my best to give this book the review it deserves.

I want to start with the one thing about this book that I didn't really find that believable.  At the end of the book Rukhsana's parents do a complete 180 and start loving and accepting her so much that they even try to find a nice Muslim lesbian for her to date.  I love that her parents finally realized that they could lose their daughter if they didn't come around, but the extent to which it happened seemed far fetched.  It would have been much more believable an ending had the transformation been slower and harder to reach.  It takes a lot of time to dismantle deeply held beliefs, and sometimes it even takes a lot of therapy.  It takes more than one event to clear everything up.  So I just think there could have been a bit more to the ending.

Other than that, I loved this book so much. While I didn't love all the characters, I did love that they were all very well written and well developed. They were each integral to this story and what happened throughout it.

Rukhsana - she was stronger than people gave her credit for, and had so much empathy for people, and cared so much about others around her.

Sohail - he fought so hard for the right thing, and even though things ended so tragically for him he continued fighting for what was right until the very end.

Shaila - Rukhsana's cousin was so so amazing, loving, and accepting.  Se welcomed Rukhsana just as she was after she came out and was so willing to be there and stand up for what was right.

Aamir - He was the best brother Rukhsana could have asked for. He would give her a hard time like brothers do, but underneath it all he was there for his sister and always did what was right to help and protect her.

Rukhsana's friends - they were so tone deaf and didn't even make any effort to understand Islam and why Rukhsana's parents held their wrong beliefs.  They habitually told Rukhsana that it really couldn't possibly be that bad and brushed what she told them under the rug.

The rest of the book:

I thought this book was well written right up to the end.  While the events were hard to read about and may seem extreme to some people, I had to remind myself that many people, including white western people, grow up with parents who have extreme belief systems.  Rukhsana goes through a lot when her parents bring her to Bangladesh and try to force her into an arranged marriage, but she and they come out of it stronger and more willing to examine toxic beliefs.

The events that happened in this book were extreme and toxic, but I believe they were necessary for the plot of the book.  It is so heartbreaking that there are parts of the world where people are forced into arranged marriages or killed because of who they are.  It is hard to know that there are places (yes even the United States) where religious extremism literally causes people to die.  Reading this book will open your eyes to the way some people feel and believe in other countries, and I am glad that I read it even though it broke my heart in many ways.

I think the plot in this book was well developed and well planned out. It moved well together, and every thing that happened moved right into the next thing flawlessly.  With the exception of that ending, I think everything in the book worked together well.

Most of the characters were really well developed and well written.  Also, even though Rukhsana's friends were the way they were, I think that was what opened their eyes to the fact that they actually need to listen to people and be respectful of the fact that not everybody's life is just like theirs. And, while there are many teenagers who are very mature, most teenagers are still at an age where they are learning not to be so self-involved.  They are learning to be more aware of the world around them, and that's just part of the growth process for teens.  I think everything that happened in this book is definitely going to help her friends grow and change and develop a greater awareness of the world around them.

Like I mentioned, the ending was really the only thing that fell flat for me.  Other than that, this is a stellar book and an absolute must read!

If you've already read this book and you have thoughts leave me a comment below.  I'd love to hear what you think. 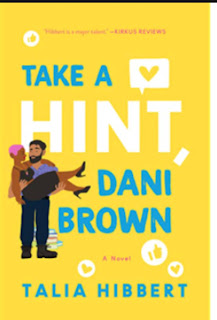 As you have probably heard, Talia Hibbert's been taking the romance world by storm!  And that storm is well deserved - Hibbert's Brown sister trilogy is so cute and so funny.  Every book in the series is a must read for anyone who likes cute romances filled with lots of chemistry and tons of great Oops moments that are bound to make you laugh.

This is another book where I can't think of anything I didn't like.  The characters, the romance, the relationship between Dani and her sisters - all amazing.

The characters were all really well written and well developed.  I like that we got to learn about Dani's and Zaf's past and why that made them who they were.  That was really important because their pasts paved the way for them to learn, grow, develop, and really truly be happy with each other.  I know it's probably a bit cliche to say that the MC is your favorite character, but Dani really was my favorite character.  I loved her and her go get it attitude. I loved that she learned a lot about herself and what she really wanted while she was faking it with Zaf.  She really did a lot of seeking and self growth throughout the course of the book.

I also loved that Zaf was aware of the impact his past had on him and was willing to put in more work to change his mindset and his life.  He knew he had so many issues with anxiety because of his past, and he had let that rule him for a while, but then he grew, and he learned, and he changed and made more efforts to further himself.

This book was, in addition to being chock full of great characters, so so funny.  There were some serious things in the book, of course, but overall, Rom-Com is the best way to describe this book because it is romantic and hilarious.  (Dani+Elevator!  Come ON!) Talia Hibbert definitely has a way of creating smart, well written books that will make readers laugh out loud.

I loved that the book flowed so well. The book was so well written and the events that happened throughout the book helped me get a better insight into the characters and really helped the story feel fleshed out and well developed.

Overall, this is a cute smooshy romance everyone should read.  I'll be waiting here for your comments when you finish it!

If you've already read Take a Hint, Dani Brown, tell me what you think below!

Posted by Maggie at 6:00 AM No comments:

Excuse Me While I Ugly Cry - Joya Goffney 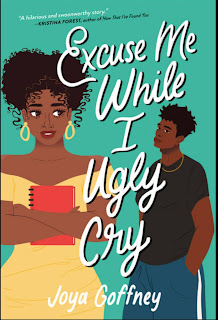 Excuse Me While I Ugly Cry is a book that every teenager should be reading right now!  It's well written, relevant, funny at times, and so full of heart and emotion.

Quinn is teen who loves to keep lists - she uses it as a way to get her emotions out because she hates talking about her feelings out loud.  Enter Carter, a boy at her school who mistakenly grabs her journal, and then reads it and, after a busy moment in class, forgets it in a classroom.  Bullying ensues, but so does a lot of really great stuff that drastically improves Quinn's life.

Quinn and Carter are teenagers who both face hurdles you'd expect like parental expectations, snotty "friends", all those wonderful teachers at school. They also have to try and navigate life around their white peers and friends, most of whom are completely unaware of their racism and the microaggressions they are committing.

I honestly can't think of a single thing I didn't like about this book.  I loved the story, the characters the development of every single thing. This is definitely a book that will leave lasting imprints on me for a long long time.

The characters in this book were all so wonderful and so well written, and the author portrayed their experiences as teens very well.  (Take that opinion for what it is - I am 40 after all, so it's been a while since I was a teenager.) Each character was unique unto themselves, and there was a lot of growth in our two main characters, Quinn and Carter.  They both developed a great sense of who they were, Quinn especially. She grew from someone who was afraid to let things out, and bottled things inside, to someone her grandma knew she could be.

The connection Quinn and Carter had with each other was great.  They started out in this awkward, weird, helping each other space, but the vibe between them was there from the beginning.  They grew into that and developed and learned about and from each other so much.

I really loved everything about this book, and it's a book I'd recommend to everyone!

Posted by Maggie at 5:31 PM No comments:

Email ThisBlogThis!Share to TwitterShare to FacebookShare to Pinterest
Labels: Excuse me while I Ugly Cry, Joya Goffney, YA, YA Book
Newer Posts Older Posts Home
Subscribe to: Posts (Atom)