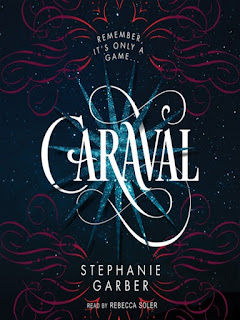 I finally read and finished the Caraval book (and the rest of the series - reviews coming!) I am so glad I finally read the book, because it was AMAZING.

Scarlett and Donatella Dragna, the sisters who lead the series, are two characters that you can't help but love, even when they're being insufferable to each other.  They obviously had the sisterly moments where they were driving each other nuts, but it was also very obvious that they really loved each other.

Dante is a unique character, to say the least.  He is a dark, sort of brooding guy who is actively involved in Caraval.

Julian is a sly, cunning character, and I really enjoyed the way that he and Tella ended up being....in on a plan from the beginning.

Their father.  Let me say that again: THEIR FATHER!  That scheming, plotting, asshole.  With a father like him who needs enemies.

And Scarlett's fiance.  Oooh boy.  She went and "fell in love" with some dude who she only communicated with via letters.  Seems legit.

To sum up the MC's and major characters: they were all well written and well developed.  They each had a LOT OF PERSONALITY!  And each character added so much to an already amazing story.  The other more minor characters that filled the pages fleshed out this book and the story so well.  They added darkness and humor and some great fun to the game and to the book.

There was a lot of mystery and intrigue weaved throughout this entire book, and a lot of great foreshadowing for the future books in the trilogy.  The whole story was so well developed that I didn't want to leave this world and all it's magic.

-The entire island that Caraval takes place on.

-The mystery behind who Legend actually is

-Tella being much, much sneakier than her sister realized

-That girl on the bike. She was the historiographer of Caraval, but also did some hinting for the players, and she added an element to the story that was mysterious and fantastical.

-How the entirety of Carval took place at night.  I think that really added a great element of mystery to the game.

-Those little bits of humor that were woven into an otherwise serious book.

-This book had some great foreshadowing and really set itself up well for the rest of the series.

-The worldbuilding was fantastic and very well done

Overall this book was fantastic and worth the read.  My only regret is that I waited so long before I got to it!

Now reader friends - I want to hear from you!  Have you read this book.  What did you think of it? Let me know in the comments.

Posted by Maggie at 9:30 AM No comments: 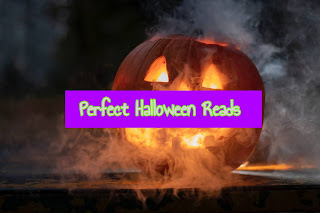 Halloween is just weeks away!  If you're looking for some spooky, scary books to get you in the mood, here's a list just for you (and any young people you might have in your life.)

Are there any books you'd add to this list reader friends?  Drop a comment below and let me know what your favorite book(s) to read during October are!

Posted by Maggie at 6:30 AM No comments: