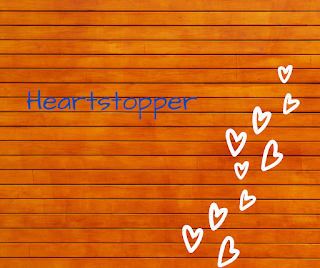 I just finished watching Heartstopper on Netflix, and it was just as sweet and adorable as the graphic novels.  If you're a teen who loves romance and all sorts of sweet cute stuff, or if you're an adult who loves rooting for kids being kids and being themselves, this is the series for you.  It is fluffy and awesome and I loved it!

The series does a lot of things well, including the casting.  I absolutely loved each person cast in the series and I thought they fit into the characters they were playing so well.  I especially loved that they cast a trans actress to play Elle.  Hollywood has this bad bad habit of casting cis people to play trans roles, and that's just not cool - so it was really refreshing to see that they had cast Yasmin Finney in that role.

True to the graphic novels, Ben and several of Nick's friends were real jerks.  Ben especially was just horrible!  He was so nasty to Charlie and it was absolutely fantastic when Charlie was finally able to build up the confidence to really tell Ben to basically fuck off and leave him alone.  Go Charlie!

I loved that the art teacher was so cool and understanding with Charlie.  He'd been there when Charlie was bullied, when Charlie went through it with Ben, and just created this safe space within his classroom that made Charlie feel good.  It's great when the important adults in a young persons life show those kids that they are safe with that adult and that they can be whoever they are without question.

The books and the Netflix series both show that acceptance is a good thing, It is amazing to see a series that wholeheartedly embraces all the characters and shows them living unapologetically.  I know someone is going to get their panties in a twist and get mad at seeing a show and a graphic novel series that shows queer love and joy, but my suggestion for them is: get over it.  Everyone deserves to be happy, to feel joy, to experience all the good things in life, and that includes LGBT people.  Alice Oseman did such a wonderful job creating this whole world and showing the love these people felt for their friends, and the joy and happiness they want with the people they liked.

It was fantastic to see Charlie grow and to see Nick grow - to watch them both learn so much about themselves and who they are.  They were both just phenomenal and wonderful, and the actors cast to play them in the Netflix series were so so good.