My Top Ten Favorite Fantasy Characters of All Time 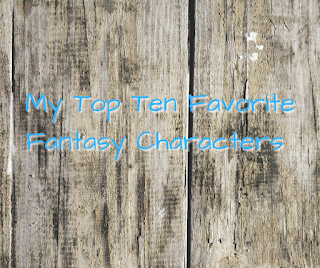 Hey reader friends!  Welcome, welcome.  Now, I know what you're thinking: How can you POSSIBLY pick just TEN FAVORITE Fantasy characters??!??!  Well, believe me - it's not easy. But I've narrowed down my list, and here are my personal ten favorite fantasy characters of ALL TIME!

Evie O'Neill - The Diviners Series: Evie was an absolute pain in the ass, but she grew so much during the series and really learned how to use her powers to help people.

Memphis Campbell - The Diviners Series: Memphis went through so much and was such a kind hearted person.  He did what he needed to do not only to help others but to help himself and his brother from outside forces.

Adelina Amouteru - The Young Elites: Adelina was absolutely fierce and completely bad ass.  I don't even know what else to say other than - I stan Adelina.

Frodo Baggins - LOTR: Look, sure Frodo was tasked with getting the ring to Mordor, and he kicks ass, but he's also kind of like....too meek and didn't carry the fellowship at all! But I still love that furry footed little dude.

Jon Snow - A Song of Ice and Fire: Do I need to elaborate?! He was raised as his father's bastard never really fitting in with his own family, but he loved them and so many others so so fiercely.

Rue - The Hunger Games: That child went through so much, and died so that the w h i t e kids could win. I said what I said. Her death was horrific and completely unnecessary. She was brave and wonderful and didn't deserve what happened to her. None of them did, but Rue didn't the most. Forgive me for the horrifically written sentence reader friends - that's how much I hate that Rue died.

Gandalf - LOTR: I'm not even going to elaborate on this one.  It's fucking Gandalf.

Legolas and Gimli - LOTR: I KNOW I PICKED TWO. Hear me out - these two started out HATING each other because, well, dwarf and elf.  They ended up building this wonderful, amazing relationship, and doing so much to help the fellowship and Frodo throughout the entirety of LOTR!

Arya Stark - The Song of Ice and Fire series: This kid starts out as a kid who just kind of bothers her sister, almost ruins Sansa's chance at marrying Joffrey (apparently) and then grows into a complete and total bad ass.

Samwise Gamgee - LOTR: I literally cannot think of a SINGLE character I love more than Sam! He carries the Fellowship, he keeps Frodo safe despite what seem like insurmountable odds, and he is THE MOST gentle soul.  I will never not love Sam until the end of time!

Okay reader friends: What do you think?  Do you have any fantasy characters from my list that you love?  Do you have ones I may not have mentioned that you really love? Let me know in the comments.