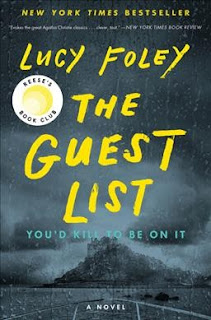 Well, dear reader friends - here it is: the first book I've read this year that 100% did not live up to the hype for me.

The book started with Hannah and her husband Charlie on a boat to the island where Jules's wedding is being held.  From there, much of the first 1/2 of the book is all talking about clothing that everyone is going to wear, or the men acting like teenagers, or Hannah's insecurities.  I almost DNF'd the book more than once, but felt obligated to finish it because it was for book club.

Sure, there were a few moments throughout the beginning of the book that helped build character - like Hannah and Olivia talking to each other about some BIG THINGS that happened in both of their pasts. Those moments also definitely added some element of surprise to the novel.  But for the most part, I was bored reading about them just talking about clothes, or having sex with each other. (Seriously, the bride and groom COULD NOT keep their hands off each other.)  I don't want to sounds like a prude - I read books with sex in them, that's not my complaint.  In this case, it didn't add anything to the actual story though.

In spite of everything I hated about this book, I think the setting did work well for the story.  It added an element of build up and tension that other parts of the story did not have.  That being said, taking a bottle of vodka out through a rocky passageway and getting drunk is probably not the wisest decision.

This was supposed to be a psychological thriller, but it didn't scare me or get me riled up at all. It just made me mad and bored that the book wasn't more well written.

If you've read this book, let me know what you thought in the comments below.  If you have any suggestions for psychological thrillers that pack more of a punch, Let Me Know!