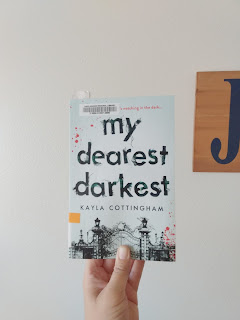 WILDER GIRLS meets THE CRAFT in this Sapphic horror debut that asks: What price would you be willing to pay to achieve your deepest desires?Finch Chamberlin is the newest transfer student to the ultra-competitive Ulalume Academy... but she's also not what she seems. Months before school started, Finch and her parents got into an accident that should have left her dead at the bottom of a river. But something monstrous, and ancient, and terrifying, wouldn't let her drown. Finch doesn't know why she woke up after her heart stopped, but since dying she's felt a constant pull from the school and the surrounding town of Rainwater, like something on the island is calling to her.Selena St. Clair sees right through Finch, and she knows something is seriously wrong with her. But despite Selena's suspicion, she feels drawn to Finch and has a sinking feeling that from now on the two will be inexplicably linked to one another.One night Finch, Selena, and her friends accidentally summon a carnivorous creature of immense power in the depths of the school. It promises to grant every desire the girls have kept locked away in their insecure hearts―beauty, power, adoration―in exchange for a price: human body parts. But as the cost of their wanting becomes more deadly, Finch and Selena must learn to work together to stop the horror they unleashed, before it consumes the entire island.

I have been searching all year for a book that hits the nail on the five star head.  The Mary Shelley Club was one, and this was the other!  This book was creepy and weird and gave me all the 5 star shivers.

Was the book without faults? No.  After all, Finch could have been just a smidge *deeper* and more developed. But overall, the feels this book gave me were enough to overlook the fact that the MC needed more development.

The rest of the characters were wonderful. There was the angst that is typical in YA novels, but come on - being a teenager is hard. Being a teenager at a school with a weird creature living under the tunnels is even harder. I mean, Damn.

There were some really gross moments in this book, and a lot of body horror. (Seriously, if you can't handle body horror, don't read this book.) But for me, that added to the tension and mystery in the book.  I loved the mystery behind Nerosi.  There was this spirit behind her and a change to her as each sacrifice happened that really opened her character.  Each appearance if the stag and the past people who were lost to Nerosi's weird life were also great looks into her character and what she was really like.

I loved the aspect of this horrific creature and all these events happening at an old boarding school (old as in the building has been has been around for a while.)  Having all the hidden tunnels under the school added a mysterious element because you never new what was going to happen to the students or what they were going to really fund when they went to the tunnels.

The thing that did seem strange to me was that students at a boarding school would be able to live basically off campus like Selena, Kyra, and their other friend did.  Teenagers are certainly much more independent than younger kids, but these kids are still in school, and I'm assuming that when teens go to a boarding school, the parents are trusting the staff to take care of the kids and keep an eye on them.  These kids living off campus in that light house definitely opened the door to the kids being able to cause a lot of fuss (hello Nerosi!)

Overall, though, I really love this book.  It has the perfect amount of weird and creepy with some great self exploration and self discovery thrown in.

Posted by Maggie at 2:16 PM No comments: