Eyes of the Forest - April Henry 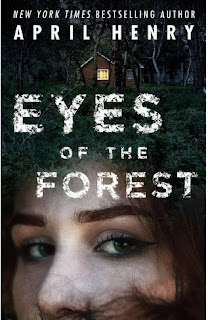 After a bestselling fantasy author disappears, only his biggest fan believes he’s in danger and has the courage to uncover the truth in this fast-paced mystery with a chilling psychological twist.
Bridget is RM Haldon's biggest fan. His epic fantasy series, Swords and Shadows, created a lifeline between Bridget and her mom as she lost her battle with cancer. When Bridget met Haldon at his only book signing, she impressed the author with her encyclopedic knowledge of the fantasy world he'd created. Bridget has been working for him ever since as he attempts to write his final book. Now, Haldon is missing, and Bridget is the only person who seems concerned. Can Bridget piece together Haldon’s clues and save him before it’s too late?
Master mystery-writer April Henry weaves another heart-stopping young adult thriller in this story that seamlessly blends suspense with fan culture. For readers of Courtney Summers and Karen McManus.
~~~~~~~~~~~~~~~~~~~~~~~~

I was told there'd be a thriller. There was, in fact, no thriller.

This is the first April Henry book I've read, so I didn't know what to expect.  The only reason I rated this book two stars was because it was not, in my opinion, a thriller.  It was not this heart pounding, "That person's been kidnapped" story. Rather, it was a book we go into fully knowing that the author has been kidnapped, and who did it.

Bridget, the books MC, is a superfan of a local fantasy author whose books have been popular since before she was born.  She's continued holding them close to her heart because she read them with her mom, who died when Bridget was 12.  In the second chapter we learn that Bob, author of this beloved fantasy series, organized his kidnapping with a local teen - Derrick.  Bob knows Derrick because Derrick's mom is Bob's cleaner/secretary.

Anyway, during this "kidnapping" Derrick brings Bob things, and forces Bob to write, then sells the writing to people in the dark web.  It's not until halfway through the book that Bridget, who was apparently drafted into helping Bob keep track of his books because she has an encyclopedic knowledge base of said book, realizes that something is wrong and emails Bob. This leads him to email her, and it takes her just as long to realize the email is a code and MY GOD IT WAS SO SLOW AND SO INSIPID.

So, before I go and spoil anything else (sorry, kind of) let me tell you about the following:

The Characters. They were not well developed at all.  They were all pretty one dimensional with no depth and nothing to make me care about them, not even a little bit.  There was literally not a single character in this book that I genuinely liked and wanted to root for.

The Writing.  Mediocre at best.  There was just enough there to make me want to finish just so I could see HOW Bob got out, but otherwise, the phrasing of things just fell flat.

The Story.  BORING.  The last time I was this bored reading a book that was supposed to be thrilling was when I read Lucy Foley's The Guest List.  When you know what's happening from the very beginning, it sort of takes all the fun out of it.

Drop some recs for awesome YA and adult thrillers and horror in the comments if you've got them!

Email ThisBlogThis!Share to TwitterShare to FacebookShare to Pinterest
Labels: April Henry, books, Eyes Of the Forest, reading, Thriller, YA, YA books