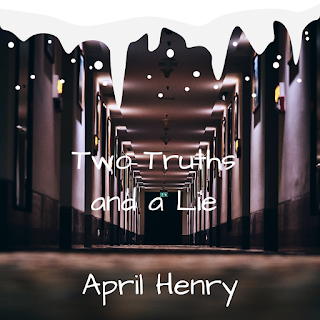 A group of teens are trapped in an old motel with a murderer in this chilling YA mystery by New York Times bestselling author April Henry.Nell has always wanted to be an actor, but doubts her ability. As a member of her school’s theater program, she prefers working backstage. On the way to a contest, an unexpected blizzard strands her acting troupe in a creepy motel. Soon they meet a group of strangers from another high school—including the mysterious and handsome Knox, who insists they play the game Two Truths and a Lie. When it’s Nell’s turn, she draws a slip of paper inked in unfamiliar handwriting:I like to watch people die.I’ve lost count of how many people I’ve killed.Suddenly a night of harmless fun turns into a matter of life and death. As guests go missing, it becomes clear that a murderer is hiding in their midst ready to strike again. In a room full of liars and performers, the truth is never quite what it seems. Nell is going to have to act like her life depends on it—because it does.

Two Truths and a Lie had an interesting premise, and there were parts that were definitely thrilling and scary.  I don't know if I'd read it again, but it was a good one time read.

I personally felt like it was pretty easy to figure out exactly who had committed the murders in the 80's.  BUT that's just me.

Other than figuring out who exactly the bad guy was, I did enjoy trying to figure out what that person was going to try and when.  I thought there was some good tension and thrill in that aspect.

Since I know what midwest winters can be like, I found the scene of them being trapped in a blizzard totally plausible.  (It happens - ask me about the night we spent in a school during my freshman year at a speech tournament.)  The weird creepy motel added even more to the story and made me never want to stay in some country motel ever!

When both groups of kids arrived at the motel, one group had an actual teacher with them, and the other group had a student teacher with them.  The actual teacher went to bed, stating she was going to take a sleeping pill and was not to be woken up until the following morning under any circumstances.  The student teacher stayed up all night with the kids and played games with them.  Don't be like either one of these adults.  That was very frustrating to me.  They both should have done a better job supervising the kids during that first night.

I liked Travis's development throughout the book.  He had some things going on, but I think he was really a sweet guy who just wanted to make other people happy.

The book was a quick read, and scary enough to keep me hooked.  If you want something that's thrilling yet quick, check it out.

If you've read the book already, let me know what you thought!

Email ThisBlogThis!Share to TwitterShare to FacebookShare to Pinterest
Labels: April Henry, Two Truths and a Lie