The Family Across the Street - Nicole Trope 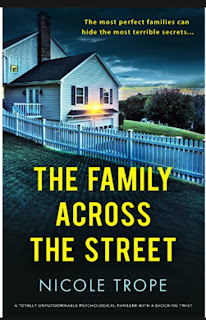 Sometimes, the most perfect families are hiding the most terrible secrets. How well do you know the people next door…?Everybody wants to live on Hogarth Street, the pretty, tree-lined avenue with its white houses. The new family, the Wests, are a perfect fit. Katherine and John seem so in love and their gorgeous five-year-old twins race screeching around their beautiful emerald-green lawn.But soon people start to notice: why don’t they join backyard barbecues? Why do they brush away offers to babysit? Why, when you knock at the door, do they shut you out, rather than inviting you in?Every family has secrets, and on the hottest day of the year, the truth is about to come out. As a tragedy unfolds behind closed doors, the dawn chorus is split by the wail of sirens. And one by one the families who tried so hard to welcome the Wests begin to realise: Hogarth Street will never be the same again.A completely gripping, twist-packed psychological thriller, perfect for fans of Liane Moriarty, Sally Hepworth and Lisa Jewell.

I actually did a video review!  Watch it below, and as always, let me know if you've read the book and what you thought of it in the comments.

Posted by Maggie at 7:15 AM No comments:

Email ThisBlogThis!Share to TwitterShare to FacebookShare to Pinterest
Labels: Nicole Trope, Psychological Thriller, The Family Across the Street, Thriller 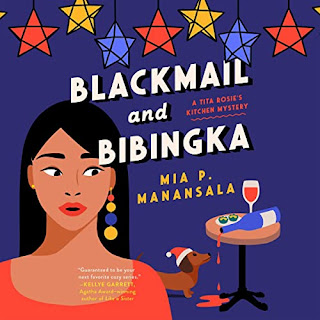 When her long lost cousin comes back to town just in time for the holidays, Lila Macapagal knows that big trouble can't be far behind in this new mystery by Mia P. Manansala, author of Arsenic and Adobo.It's Christmastime in Shady Palms, but things are far from jolly for Lila Macapagal. Sure, her new business, The Brew-ha Cafe, is looking to turn a profit in its first year. And yes, she's taken the first step in a new romance with her good friend, Jae Park. But her cousin Ronnie is back in town after ghosting the family fifteen years ago, claiming that his recent purchase of a local winery shows that he's back on his feet and ready to give back to the Shady Palms community. Tita Rosie is thrilled with the return of her prodigal son, but Lila knows that wherever Ronnie goes, trouble follows.She's soon proven right when Ronnie is accused of murder, and secrets and rumors surrounding her shady cousin and those involved with the winery start piling up. Now Lila has to put away years of resentment and distrust to prove her cousin's innocence. He may be a jerk, but he's still family. And there's no way her flesh and blood could actually be a murderer...right?

Blackmail and Bibingka is the third book in Mia P Manansala's Tita Rosie's Kitchen series.  This book, like the previous two in the series, solidly lives up to the mystery aspect.

As soon as I started listening to this book I knew I was going to be delighted.  The book itself is well written, and the characters are as well rounded and developed as in the previous two books. In fact, this book takes things one step further when Lila's cousin Ronnie returns to town.  He's Tita Rosie's son, and meeting him helps give us some insight into Tita Rosie's past and family life before her husband and son just left her and skipped town.

With each new book in this series, the author takes us deeper into the lives of the characters.  We get a chance to learn more about them, their motivations, and who they are.  I love that in this book Lila's two best friends were more prominent.  We got to know them as not just her friends but her business partners (and people who put up with her being a nosy Nelly, and who even assisted her nosiness once in a while.) I enjoyed seeing even more of Jae Park, Lila's dating buddy and definitely future boyfriend.  He had this calm presence and was really good for Lila.  They get along well, and the chemistry they shared was spot on.

I liked the mystery in this book.  We start off thinking we know exactly who did the crime, Ronnie!  But of course we learn how wrong we are.  At a certain point you are able to really connect the dots and figure out what happened to Ronny's fiance, and the build up to get to that point is fantastic.  The author weaves in so many details and surrounds Ronny with enough people that you have to wonder at first who was having a little...fun, shall we say.

With each passing chapter, just enough is revealed that you have to keep going to find out more and solve the mystery.  And when you finally get it, it's great. Maybe I'm a little slow picking up on mystery stuff, but I had to really think about things before I figured out who did what.  BUT I enjoyed every little clue and every little aha moment throughout the book.

I also loved that we got to see Lila and her friends doing more with their business.  They opened a cafe called the Brew-Ha Cafe, where they have coffee, baked goods, and the cutest crafty items.  And seeing how they all work together in the cafe and as co-business owners is fantastic.

Overall, in my opinion, this is a must read.  And, as always, if you've already read it, let me know what you thought in the comments.

Posted by Maggie at 6:46 PM No comments: